Here's a picture of the 1/350 scale Dragon USS Buchanan I just finished painting. It took quite a while to assemble but the actual painting went quite quick. The model is a X-gift for Wifey's dad.

The Buchanan was the WWII Destroyer my wife's grandfather served on during WWII. In addition to her Presidential Unit Citation, Buchanan earned sixteen battle stars in World War II.


Sorry about the dark photo, I was too lazy to set up good lighting.This was a nice model kit, I'm happy with the way it turned out considering it was my first naval model. 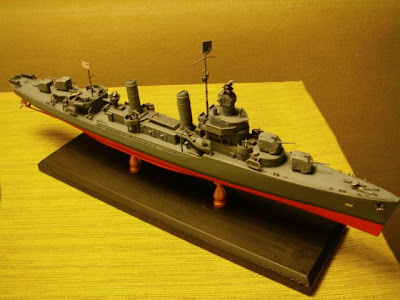 Email ThisBlogThis!Share to TwitterShare to FacebookShare to Pinterest
Labels: wargaming

As 2009 comes racing forward threatening to close the book early on 2008 winter bass. It's time to look back at what I think I learned and accomplished in 2008.

1)Fishing with another person is great for discover a pattern quicker and sharing great moments. 2 Don't have to carry as much gear as one individual does on a long wade. A good fishing buddy trades casts and communicates well potential danger zones for spooking fish. Mike and Jim are great guys for this. 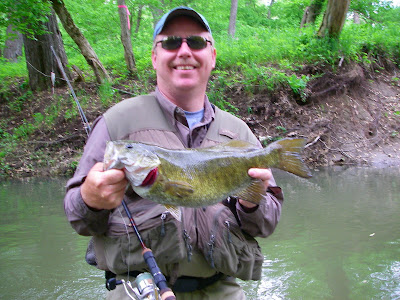 2) When summer months hit and water got low and clear, the majority of 'awesome' days were by myself for size and numbers. 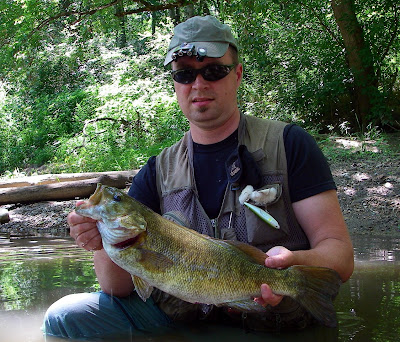 3) I taught Jim a lesson on throwing heavier weights on his tubes in March, couple weeks later, Jim returned the favor big time in April. Weight makes a huge difference getting bait down to the fish. 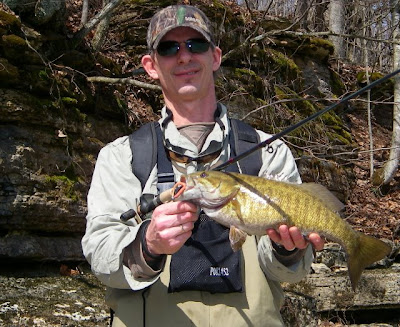 4) 2008 Indiana summer stream fishing pattern was crazy different from the all day onslaughts of 2007. Hard work was required. Predusk bite was king from mid June on. We had a lot of sun and very little rain after the early June flood. 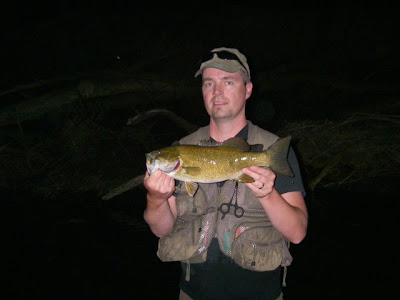 5) Small streams covered in trees often have better all day summer fishing because of the lower temps and higher O2 levels. Hitting 3 or 4 streams in one day is aces! 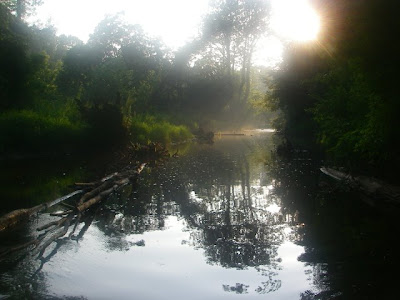 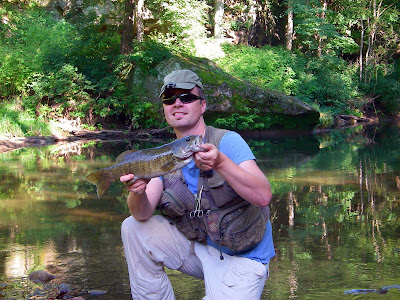 6) My clear winner for most productive lure of the year was the Lucky Craft Splashtail 90. The Lucky Craft Rick Clunn Wakecrank most promising new lure. The Workhorse ubiquitous 4" tubejig 3/16th oz head caught the largest share of fish and 3 of 4 20"+ SMB in '08.
Honerable mentions to 5" fluke, chatterbait, Pointer 100, Sammy 100. 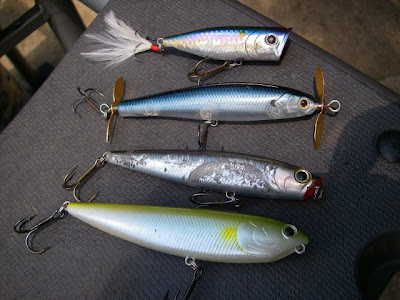 7) Smallmouth bass will ignore one topwater while destroying another. The noise a topwater makes can spook or incite depending on excitement levels. 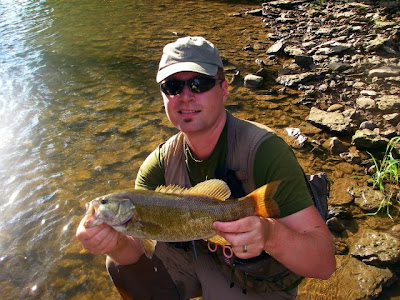 8) Last year up sizing was king, this year down sizing worked on occasion, at least with Sammies. The Sammy 65 is a keeper. 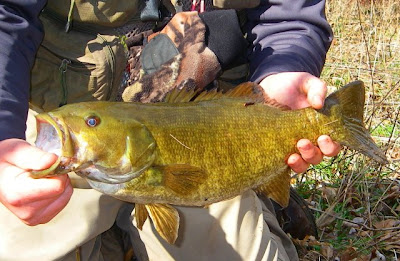 10) Check good spots in late fall and winter when the water is clear for bottom structure. 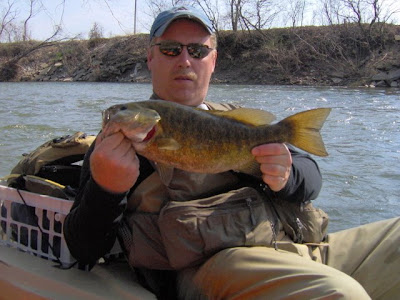 I think I am most proud of finding fish consistently this year in all conditions, fishing with over a dozen different smallie anglers, and catching at least one fish out of 33 different Indiana creeks, rivers, and streams in '08.
Posted by BT at 4:35 PM No comments: 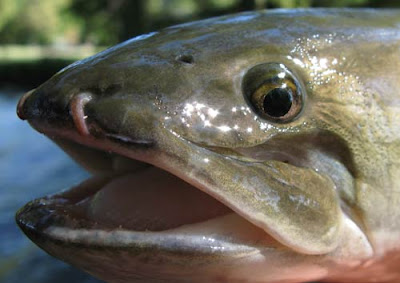 Ok, I am going on record that I am going to try and catch some Bowfin in 2009. Piecing together the how, where, and why will get me through the frozen creek winter times.

They seem too cool for school.


It may turn out that I don't like to go to the mucky places where these fish hang out, or see another potential smallie stream on the way to the swamp pit where these creatures dwell.

For now, I am going to research and try it. Because, why the hell not?
Posted by BT at 10:51 PM No comments:

Got these Lucky Craft Kelly J Propbait in the mail today: 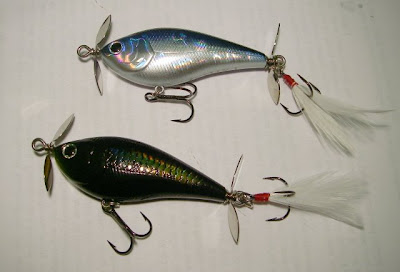 The baits look and feel great. I was looking for more durability than LC's other fantastic propbait the Splashtail 90, at first glance KJ seems to have it. The props are not fixed on ballbearings. Which is good for durability but maybe a minus on the action. The blades are thicker and seem less likely to break off. The lure's tail slowly sinks undulating that tail feather. I had started doing this with suspend dots and Splashtails anyway. It sits with only the foward top 1/4 of the bait out of water at rest. It has a knocker for better weight transfer during casting. Weighs in at a 1/2 oz and 2 3/4" long (not including tail feather). Can't wait to put them to the test in 5-6 months. These baits are going to be phenominal.

Met with Prowler around 10:30am to fish a medium river and its smaller trib. Everything up north was partially frozen. As we were gearing up, a local came out and asked what we were up to.

We basically told him we were complete smallmouth nutjobs. We got to chatting about fishing, kayaks, and I asked him if there were any good campgrounds on the river. Dude was pretty cool about it after 15 minutes had sized us up and offered to use his property to camp some time. Gave him an INSA business card and got his cell number for later use. He mentioned one of his hobbies was collecting Indian artifacts and proceeded to show us his arrowheads, grind stones, tommahawks, spear heads. I never realized I was potentially stepping past all this cool stuff. As much as I'm on the water, I'll keep my eyes open. Some of it is quite valuable. Neat.

We went fishing and I put on a demonstration of how not to cast float and fly most of the day. After about an hour, we hit a right angle bend. I finally hooked a 14-15" that lightly nibbled down the float or was it more of a sputter? One fish from that hole that usually produces many. At least smallmouth were going to participate.

We hit a side eddie in a long deeper pool at even higher pool helped by a beaver dam. It was mostly covered in ice. Matt got 2 smallies 11-12" on the float and fly. The action was slow. Fish didn't want the float moving much.

We moved on fishing a small trib, it was a waste of an hour. The river was all frozen up with a 1/4" thin sheet of ice. Tantalizingly thin. We walked back to the car and motored up to another hole I like.

When we finally got there, we caught a double almost immediatley. Matt's was 15-16" and mine was about 14". We sat on that hole and fished it for at least an hour. I got one looked 17"+, slipped out of my hand without a picture. Next cast, I pulled the fly free from a smaller fish. Float barely jumped. Like we were fishing crappie.

Smallmouth bass slowly plow the heavy winter water with an exaggerated snaking body during the fight. Matt was getting bit, his hook pulled free several times. We were both dumbfounded because it is rare to lose any fish on FnF. In our defence, I have never seen smallies hit the fly so wimpy. The didn't submerge the float. The float kind of rocked differently. Twice, I saw fish come off Matt's hook after a solid bend in the rod, I lost one this way too.

Were the fish grabbing the end of the fly beyond the hook? Strange. We did catch a few at the end for all our walking.

3-3 mostly nice fish, which this small river always seems to produce. Too much walking probably cost us some fish.
Posted by BT at 11:40 PM No comments:

The Native Fish Conservancy has been permitted to sell these fine Joseph R. Tomelleri fish prints as a fundraiser. Check it out. I think our walls need some fish.


Remember, its always easier to beg forgiveness than ask for permission.
Posted by BT at 6:42 PM No comments: 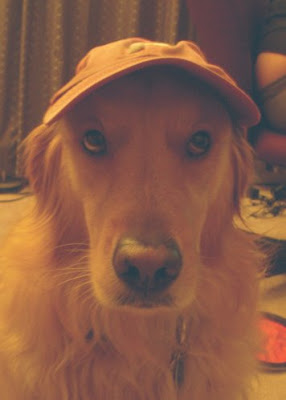