It had been 2 weeks since I threw line. Saving up my brownie points for one cataclysmic event. The INSA 2010 Camp and Fish. Basically, camp at a site, bs, eat well, drink well, bs, fish, be merry. It was great, met some great guys and enjoyed the companies of some old friends. 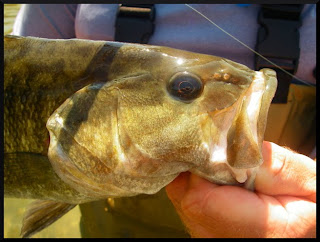 Fishing was great to good all week, though some streams seemed to be on a early AM/late PM bite for good action and bigger smallmouth bass. Drats. Disappointed some. Tough for the fly guys as big river caverns were absolutely silent, flow was as low as I have seen it CFS 2.5-59 depending on gauge. Long casts succeeded. Short casters had better be ninja masters.

I love smallmouth for their spookiness. It always adds a wildcard into the mix. I love the mass of factors that leads to answers and success. This campout had a good variety of anglers, fly fishermen, gear chuckers, novices, and really good fishermen. It was enlightening because it changed my perception of how far people fish. I found myself wanting to tell people where to go fish and what to throw, then realizing they had physical challenges that would make it difficult. The low water made floats really hard.

I got started EARLY Friday morning without my wade partner, Matt. Poor guy had gashed his head open to the tune of 10 staples and 5 hours of waiting! Matt had the stones to fish anyway later on. Props dished.

The alarm was set. With no Matt, the drive was made. Got to my water too early. Had to headlamp an AM buzzbait bite.

I hit 6/7 bites in one large pool. All above 12" to 17". Promising. Light came out. The bite either died or I hit poor water.
An hour later, fishing picked up again. It was pretty much a Rick Clunn Wake crank 1.5 or a Lucky Craft Sammy 100. The longer the cast, the better. Several huge blowups missed; a couple 15" feisty smallmouths came to hand. Numbers mounted. Another 17" bass at the bottom of a large pool.


I was walking a Sammy when HELL UNLEASHED. A massive bass exploded violently on the surface, echoing thunder on the cavern cliffs. I tightened pressure. The fish was in the air quick. 2 or 3 feet up. Splashing hard, then running for a laydown. "No, you don't!" Cranked hard and away from the danger. The fish did turn, then it burned downstream towards me. I was in belly deep water with a large treble hooked fish swimming towards me. I did what I usually do to avoid the trebles. Beached it on the cliff side in an inch or so water.  Truly a fat creek fish. Pics were mostly over my head.


Next 2 casts produced more explosive action. A nice 16" bass and a 13" bronze
who exploded out of the wood piles. A 17" fell at the next pool above:

A big bass waked for my Sammy. It connected in violent fashion. When I tightened up, the 7'6" rod hit a tree branch. The large smallie sawed off the 10 lbs braid on a rock and was gone lucky craft and all. So I sing a song of farewell to another. Goodbye.

Next day, we went far east. With great results. Fast, clear, cold water was a pleasure to fish. Great change of pace. R2C ruled early. Ripping and pausing out of shade. Mostly dinks to 12". Until Matt dropped a tube in the right rootwad!

On the walk back we came up roadside and spied down on smallies along rip rap. I site fished 4 on a tube it. was really fun to watch them move and react (or not).

Late and early up from campground Saturday night Sunday dawn. I slammed some 8 explosive fish from 15-17.25" on a black "Archer Bee" Sammy 100. 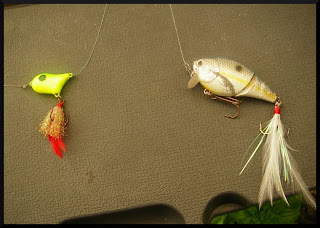 With smallies competing in packs, water low, it's time to hit some more doubles and maybe a triple bass on one line.
Posted by BT at 6:53 PM 2 comments: 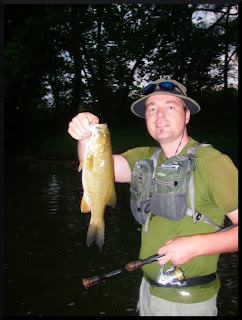 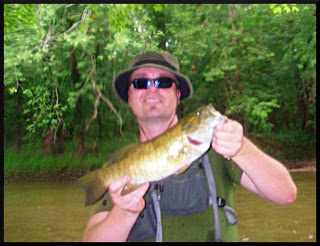 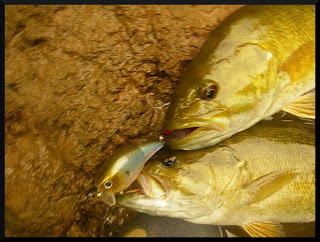 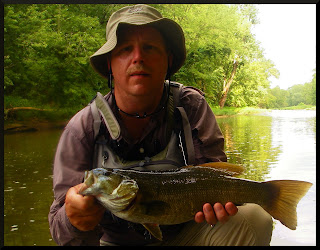 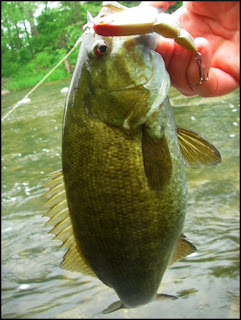 Wife's cousin is getting married in Wisconsin weekend of August 22nd. Shall I purchase a Wisconsin fishing license and hit random stream Z? Suit up Bond style for the wedding after? Guess we will be around Milwaukee, if my poor memory is correct.

Water is coming down to summer levels in some areas, in others the flow is nearly still. I hit one such creek this morning.

Nothing too exciting or dramatic. Early it was all about tubes. One nice 17"er to hand 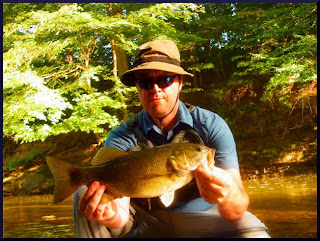 Water was cool early. Bass didn't want much movement.
As it warmed up there were active smaller fish near what little current I could find. I used a Mega Bass propdarter. It was a success. Shiner and Smallie on one bait: 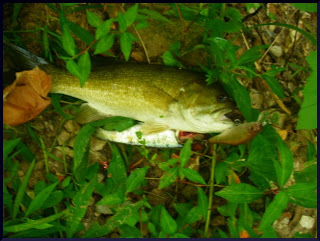 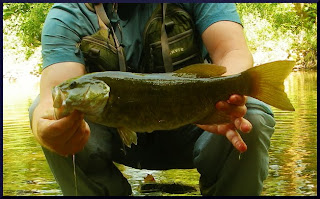 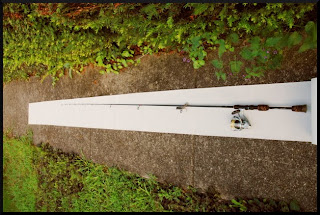 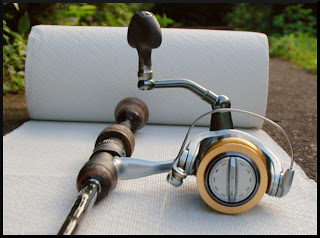 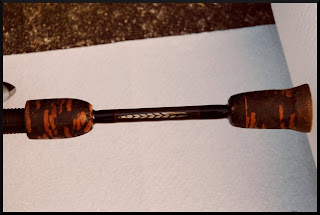 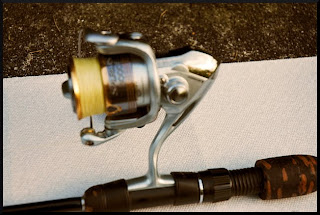 Saturday was pleasantly overcast and in the low 80's. A welcome break from this year's string of upper 80's to low 90's sunny days. Met up with fellow INSA member Jeremy S. We must have gotten on the water around 8:15 or so. We waded down one large flow and up a small tributary.

When we got to the trib, signs that things were gonna be good started popping up. Large fish followed a sunfish back to me and nearly got it. We picked up dinks with a couple of 12-14"ers mixed in.

Jeremy caught his first Indiana smallmouths today. Mostly throwing a tube and swimjig. I was throwing RC/LC/WC 1.5 (you know that by now), R2C, and tube. It was the tube that scored the nicer fish.

Here J has his largest smallie to date on a swimjig: 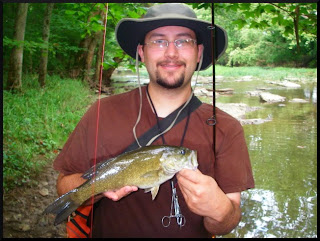 We had lots of bedrock to walk on so it was usually a comfy walk. Occasionally the bedrock would open up and bass, often good bass would ensue.
Here's an 18"+ smallie who hit a tube in about 5' of water in a wooded 's' curve: 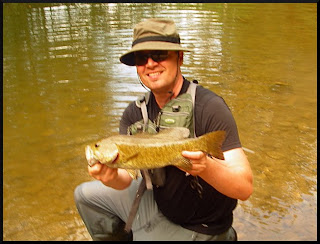 Keeping the tube mostly still for a period seemed to be the ticket.
Here's another 18"+ smallmouth bass. The fish hit and the end of another 'S' curve a wicked cool mess of contorted bedrock and sycamore rootwads. 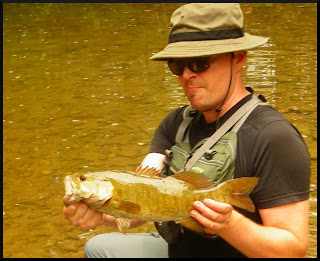 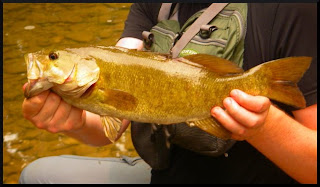 Then I popped a 16" and 15" towards the middle of the 'S'. J  got on the board pulling a bass out of the wood and caught the next three fish on tube at the next pool. Once he figured to stop moving the bait. He started getting bit. I got a couple nice ones on a 5" grub 14" and 16.25".
We hit a bedrock pool with plenty of ledge to wedge and shade. It was on. Must have caught 15 bass from that pool on WC and tube. Bigger bass missed the bait. Waded further adding more dinks so it became an outrageous numbers game. Rock bass o plenty joined in with a few in the 9" range.
We ran out of good water due to long bedrock so we headed back. J had to be back to Lafayette.
He got 13 or so. That is a good start.
I went and got lunch and hit a second flow. Oh, the second flow! I wanted to wade down to a large pool that was too deep to wade through last time so I had turned around. This time, I started at the riffles above the pool, knowing the low water would have active fish in oxygenated water. The overcast sky should have the big boys participating like stream #1!
First hole had a fish on WC, from there a 15"er and other nice 12-13" bass. The presentation was to rip upstream, pause and wobble it away. This worked like a charm in 8" of water in the riffle above the large pool. Two big fish came at the bait, the largest had it. For a moment, I thought I had them both! Run, change of direction. The fish looked huge even compared to the larger fish of this AM. Couldn't believe I had hooked one of these monsters in this small stream. When I got it to hand, the head was huge! The fish barely broke 20"! 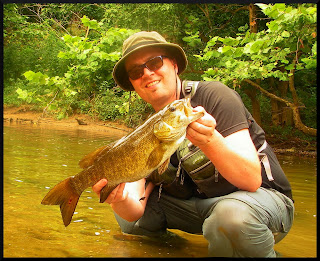 The sun finally came out. I spied shade under the large cliff along the huge pool. The bottom would be bedrock and should be somewhat shallow along its base. I carefully waded down. Presenting WC to the shade as I went. 15"er, 18.25"er on splashdown hit, 17.25" Smallie who pursued with a partner, mouthed the WC when I killed it. Awesome fights on the new 7'6" ML XF Avid John Bunner Custom rods made for me. 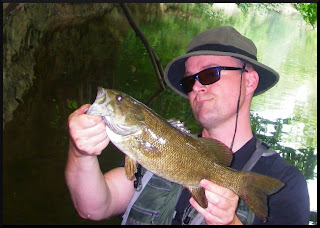