Brenden and I got out for an Easter float today.

Things started out well, with a few early fish out of some wood.

Things started to go slightly south when Brenden tried to horse his yak under a log while dragging the yak around obstructing wood, and his paddle snapped in half. He didn't bat an eye about it though, and kept on trucking, paddling canoe style with a half paddle.

The water felt warm (for this time of year) and the fish seemed pretty active. Caught a few out of feeding positions rather than typical winter spots. Many plucked from wood by dabbling the jig down in from above.

Brenden was getting a little ticked with his paddle struggles, and it came to a head when he hung up in current and then while trying to paddle upstream his line of his second rod tangled with the first, and then both with his anchor rope. He paddled hard, got frustrated and slapped his paddle against the water. Crack. The other end snapped off as well. He chucked the useless handle in frustration and floated downstream powerless.

I offered half my paddle, but instead we ended up attaching the front of his yak to the tail of mine and dragging him along. I referred to this setup as the "kayak train". The kayak train was not very fast or maneuverable. At time when we'd hit current the wrong way, he'd whip around past me, which elicited happy "woo-hoo's" from the caboose rider.

Since we were pretty slow going with this setup, and had a ways yet to go, we had to cut back on the fishing and mainly just try to make our way out. Still got a few more fish along the way though.

I think Brenden had 18~19 including an 18" (which he pulled from water I had just fished thoroughly.

Fun day! The paddle situation made it memorable. I was laughing my ass off from the bank when he snapped the paddle for the second time. First time I've seen that!

Given a choice of lower clear water or high clear water I'll take the high version every time during cold months. It stacks fish into even more concentrated places than before.

Saturday I got on a medium flow over 1000 CFS. Usually a sign for multiple pigs! Water visibility was probably around 2', air temps would reach 52F.

Brought my kayak just in case, but was too lazy to launch it, instead hoping to a bunch of Winter holes via car, and foot. I really did my first wade of maybe a mile in the middle of all the  short to medium walks. First spot I got one on a chatterbait, tube and hair jig. Each a 15" fish.

Moved up a mile and across corn fields on foot where I got another 5 without a miss to 14" on the hairjig.

Got in the car and cut across woods to a new theoretical spot which produced a handful more on the hairjig, still no misses. Took a long walk on the bedrock with current thrashing my shins. I finally reached high ground and pitched into some rootwads along a shorn steep bank. Rewarded by two more bass to 15". That was all I could find in the high water there, so trotted back to the first spot lost one and caught another 15" bass on the jig. Curious now as that was 5-15" smallmouth and nothing larger. Even with this high water to push them in easy spots?!? Weird.

Hit a gulley pipe and found another 8 bass without a miss. 2 more 15"'s and 2 16"ers. Certainly don't mind catching these. Just couldn't get the big fish today...until.

I hooked a mamouth carp on the fly along the bottom stopping at one last spot. 10 minutes plus to land. I had to wade down from a high bank and hog wrestle the fish at nearly 3' long and I'm guessing 20 lbs or more. There wasn't a good place to get a pic so I let him go. managed a handful more smallies beforehand to finish with

Had some chores to finish, took the day off from work. Figured I might try and wet a line later. Looked at the forecast. Nice and cold, 28F w/ winds up to 40 mph, but occasionally sunny too. Lots of layers helped, but damn was it cold!

Took my kayak but started on foot. A quick 15"er and then three more behind bridge piling, when I found the correct casting angle.

Went on with my float. Shelves and cracks are underwater structure that smallmouth love. Fished one pretty hard with wind trying to blow me upstream. Got a couple to 18.25" down from the shelf in the sun. Didn't take a picture of this fish as it was painfully thin and probably on its deathbed- skinny and a suction/piercing wound behind the head. Finally found the sweet spot with a float and fly drift fish. I followed this up with the hair jig along bottom for 5 more and couple pop offs.  I liken this kind of fishing to fishing on the bottom deep in a lake, you have to stay slow and keep rod movements to a minimum or you move the jig too much.

Left and floated the rest of the stretch. Lots had been changed by recent high water. Much of the wood had been removed changing things quite a bit. Couldn't get anyone knocking down deep, then pitched into a shallower boulder hole near the current and hooked a 2' carp that came to hand. Got out and hooked a dink, which I saw strike the fly jig in front of me. Later had a 13" fish follow the jig back and pull away at the last second when he saw me. Just the carp and dink in that whole waste of time. Headed back up to my ledge where I picked 4 more including this fat 18.75"er on float and fly. That fat fish tore ass! At one point, smallmouth on 9 casts in a row! Dinks were biting too, which was probably half of what I caught.

The 8'6" BPS Microlite Float and Fly rod was problematic on a couple back swings, but can really launch a 1/16th oz jig. An 18" bass puts a nice bend in it.

I like it when water comes up. Why? It pushes cold blooded river smallmouth bass into predictable places inside more predictable places and they themselves are there for the predictable food. Eddies and inside bends with depth. There is no better example of this than in the cold months. Saturday, I had the end of a slow descending drop from near flood stage meeting a thaw of the recent snow. Water of decent clarity 16-18", green, cold around 40F.

Went back to where I saw the black pool of minnows nearly as big as my house. That day, the flow was medium and clear. One fish only from the spot on float and fly. I had come back a few times to this mammoth pool after discovering it was full of nice bass in the Fall. That day, they wanted a 4" Sammy up top. Several months later I've been back with poor results considering the bass I know are in there! I had decided in my head the pool was so boulder filled it would take a good strong push to get them out of the pool and into the side pocket seen in my pic below. There's a ridge of gravel and boulder deposited by high water creek channel on the right where my kayak sits. Along with the slow inside bend you see in the pic this creates a nice eddy from 2-4' deep.
Now the water was rising, already up 6-8". Planned the ole kayak down, drag/paddle back up. About 2-3 miles down. I had done this before in lower water and it was a challenge then.

Smallies were concentrated by the swift current. High, cold water, warming, can't beat it! I'd pick them up on the bottom and drifting a float, didn't matter. Both techniques would pick up the extras here and there after I had presented the other.

Pulled 12 smallmouth off this bank from 6' above, when I hooked the first one, it shot downstream and I ran along above keeping on pressure. Could see it was huge from up there. Neat. It made a run for the riffle and then turned back from it as if to know it didn't want to live down there. At one point, pulled a 19.5", 16", 18.75" consecutively. At the top of the triangle is where I spotted the huge cloud of minnows in a past trip. Picture is of course out of scale, but you can see my kayak. The other side of the V is three times wider than the eddy. I cracked the case here. When the water comes up and deflects off the rocks above the triangle, some get swept downstream and the smallies wait in the slack. It takes current to push them out of the boulder fields in that giant pool, though. As it got later found some up in the triangle(probably bombarding the pod), including the 19.5"er!

It really was a case where smallies feed more during higher water. Their food is bunched up and they can access them with lesser visibility.

For this type of fishing, I use a 1/16th oz hair jig like those used in float and fly technique (my own ties), an 8' ML BPS Microlite FnF rod: 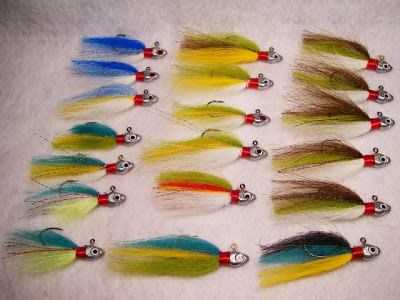 The jigs are either drifted at various depths along the slowest of current seams inside eddies, or free lined along the bottom. Yes, it's hard to keep a 1/16th oz jog on the bottom, but that's part of the success- you have to work the jig SLOW. Much slower than a tube, but not as slow as some would have you believe. The direction of the retrieve can also make a huge difference.

The small size of the lure makes it deadly. Rarely a miss. Light wire hooks have no problem penetrating with a slight twitch of the wrist. I think I missed 2 strikes today. Lost a couple during the fight, but you just can't beat a 90% hook up rate. Ever.

Flow had almost doubled and I got an insane workout, barely making any headway upstream and ploughing the yak across muddy farm fields. It really was too far. Rough return at half the flow.

Ended up breaking both my rods dragging the yak through the woods, popped the button off my pants, but it was so worth it. Lost a couple nice ones early in the day or it could have been really sick.