River was wide, not very deep.
A fast floating thrill ride Indians called Rock Creek.
Went for a float with a bike named Jim.
Caught so many bass,
I named the river after him.
Jim ran brown and Jim ran gray
Jim was green by the end of day.
Well, I cranked 'em deep and I cranked 'em long.
But it's my yellow chatterbait of which I sing my song.
Drug her slow in slow water early.
As the day drew on, 'twas water shallow made 'em surly.
One bass, rock bass, green bass, Spotted bass, Grand Slam.
Chatterbait heating, nothing small came to hand
6 mile covered, arm was really sore.
Now I see today,
The rain has washed it all away.

Very cool trip. Got out the next day (Saturday) out east by 1PM, was worn out by the bike ride from day before.Thought I'd duplicate based on euphoria with my newly arrived St.Croix Warranty rods. Looked good half hour in, got a 17.5" right away on chatter, lost another as big on crank. Somewhat slow going and lots of poop coating everything down from a small town. Smelled of animal feces. Got some more smallies, but was relieved to reach my take out at 5pm. Yanked the stem out of my bike tire trying to inflate and it went flat. Walked back to the car across two dry farm fields. Saved a lot of time. Hog pooh wafted in the air as I walked back. Yick. I think I won the pooh trifecta of man, cow, and hog, on my boots, burned into my nostrils and brain.

Uggh, changed the template for this blog recently. Only to find I have formatting problems in almost every old post. 500 something posts. Don't know if I'll go back and make sure everything looks neat. Grrr.
Posted by BT at 2:08 PM No comments:

Facebook! Your memes make me laugh, cry, and cringe. Your politics make me want to binge *that's drink*. Every day: someone freaks, cat geeks, baby creeps, gay boutiques, the racist meek, artist peeps, gun leech, national critiques, a music leak, sports streaks, work the obliques, visit to the clinique *oh, it burns*. People, can you rise above the reek? A snoop's paradise, a lurker's pursuit, a stalker's found you in your favorite bathing suit. All your actions and habits bare, machines collect you because you're there, compiling facts for Judgement Day. When greedy Capitalists FUCK YOU with your privacy.
Posted by BT at 9:52 AM No comments: 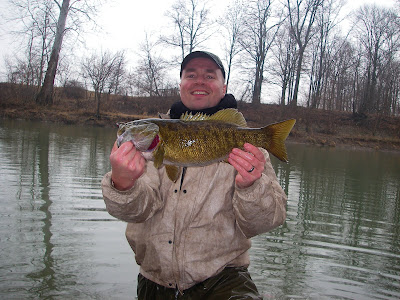 I've beached my kayak, climbed a high bank, then up a large river side hill. I intentionally slip down the side of a near 60 degree hill like some overloaded surfer,  catching a root with my free hand, taking a stick in the ribs. In my other, two long fishing rods rigged for bass fishing dart in and out of tree limbs.

The thaw is in effect and the top inch and a half of the humus are a slick mud. Traction is in and out, as my foot catches pea gravel mixed in the mud or the odd root. Mostly I slip, loving it. I plan to launch my body to the next hillside tree using the mud to take me there. Attention both on the ground and the large slack eddy  in the water below. The eyes of this hunter search for that perfect spot to deftly creep an offering between the sycamores, ashes, elms, and cottonwoods that lie buried underwater 20' below.

My path is blocked by those damnable green vines, replete with thorns that grab and rip skin. Cut them, or they cut you, tromp them or they'll tromp you down. Not a good idea up here. A long drop to 6-7' of ice cold water. Looks like it will be an army crawl to get under this thicket. I am stuck halfway. The heartless bastards embed in my backpack. Only solution now is to pull Fat Ass through. I get further tangled. Some new wounds later, I'm ready to fish.

The early Spring winds blow hard from the West. It will be hard to fish from this exposed bank. I'll have to get closer. Like flying a kite otherwise. The longer rod will help me get the monofilament line below the surface and out of the stiff breeze. Control with such a light jig is vital. Careful, now. Careful. A shadow cast across clear water can end a hot day's bite before it begins. Cast no shadow and kick no pebble. Down there be monsters, below the broken limbs, discarded 1950's truck frame, fallen trunks, the ebbing and flowing currents all must be accounted for.

Have to be...perfect. Look at the patterns in the water. Observe. 'There.' A darker spot in the water coinciding next to just the right current speed for this time of year. Crosses several lay downs. It'll be a hard land or slide down to meet the pig when it happens.  Knee is going stiff from weight on it. I shift the body 180 to put weight on the other side. An under hand swipe, the lure starts several inches above the water comes to an apex a couple feet above then drops out of sight slightly upstream, thankfully on target. I bow and let the lure sink down, down, and wait. If I'm right, it will be a soft 'thuck' or slight rubber band like tick that gives her away. A smile, always a smile at that.

The enemy is fear. Fear you'll hang your jig on something, lose it, fear this isn't the right spot at all, fear the next spot would be better. Shut the voices out. Don't trust them. Give it a chance. I again stick my jig in a  thicket. Defiant to the difficulty. The more ridiculous things I try, the better the eventual pay off.

A fevered dream brought me here, far out into the Indiana landscape of broken field after blasted field  interrupted by flowing water. One hundred miles from the place I call home. I was the fish. I thought like a fish. I reacted fish-like. Now I'm here rooting around on this muddy hill like Ahab looking for the White Whale. I think about what others are doing and pity them.

It's warmed up too much since last week. The cold blooded bass have moved into fast water for feeding just 30' away. I find the bigger fish downstream on a rip rap point heated by the sun. I missed the pigs here by a week or so.

I won't make the same mistake next year. The mud under my feet just told me where and when to fish.

Tried a small flow and there was a fish at the tail and front of most pools on current seams. Mostly crankbait action.

Couldn't get any finesse going. Wow. Am I ready to stop carrying the noodle rod. Don't know if was me or the fish. Couldn't be patient for some reason, maybe caffeine. Some 15" and 16"ers. Got to my shuttle bike and went searching for new, larger water where I might find lots of fish on a current seam or something gi-normous.

I found a river with a road along side it for some several miles. I got out grabbed trash, then tried the first riffle. Right in the fast stuff, 2 bass. Tubed. Then a couple more at the next riffle on cranks. Cut across a field where I saw this sycamore:

Water is big down there and I soon ran out of riffles that I could get to in short amount of time. Got in the car and followed the road. River looked sweet. I mean sweet. Going to have to come back with kayak flotilla.
No trespassing signs everywhere, concrete blocks thrown up to prevent parking in the 10'-50' from the river. Just nuts. I found a riffle with some blasting gradient and hopped out of the car. Nice long rip-rap and a long 60' lay down. After a couple casts with a Bandit 100, I pulled it over the log to the slower side. Someone was following

Fish was unusually large, beyond what I expected for sure. Measured out at 20". Seemed like an old fish with a sore on his back. Nothing else from the spot and I drove on. More "No Parking" everywhere. The riffles and pools made me salivate. A bridge was out, so went my last hope of finding parking. Doubled back and went home. Was a good bite on as the water was rising and the rain fell. I just couldn't find anywhere to get in and get at them.

Fishing Buddies: They Just Don't Make Them Like That Anymore...

I've had the pleasure to fish with close to 70+ different smallmouth anglers in the past 6-7 years.

The best people to fish with have the following traits.

Sense of humour about their failures and bad luck as well as good luck. Can take a joke as well as give it.

Like a cat on the riverbank, they don't rush forward spooking all the fish, or catching the first fish and leaving nothing for the trailer.

More competitive with mother nature and the fish than you.

They bring something to the table observation wise, helping discover the pattern during the day.

Prepared for anything, cool under pressure. Ability to adapt and take on all comers, regardless of the conditions.

Sense of adventure, but not recklessness.

Sharing- they know what you've shared with them in terms of places to fish stops with them.

In this day and age, it's rare for a good thing to stay good for long. I've been through some good people as life catches up to them. To those guys, I raise my glass. Shucks.

The opposite end is the the guy you take, that promises to tell no one.  You know the rest of the story, you can hardly drive by without a car parked or pics on an Internet forum. May have taken hundreds of hours to compile, but now you can hardly throw a rock without hitting some twat. Without my finger and big mouth, they're still throwing beetle spins into the kiddie ponds.

If I was getting paid well... OK. Maybe. Maybe.

Then the fishing egos!!! There really needs to be a SIYS article about fishing egos. Maybe that'll come soon.

I don't like these feelings, don't like for something so enjoyable to involve a complicated agenda. Makes me question my public fishing presence, whether there should be one.