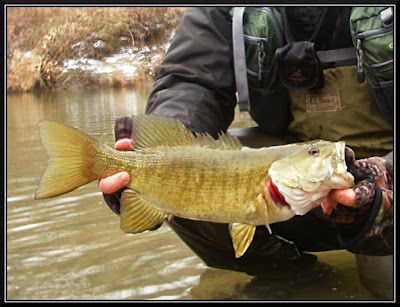 Fished a different stream Sunday hoping for more hot action like yesterday. Unfortunately, water was ultra clear had come down considerably in the last couple days. The drive was too long to not give it a try.

This stretch used to be beautiful and filled with fish everywhere just a couple years back. The last two years of floods has changed that significantly. Silt filling in beautiful pools is depressing.

I found a lone fish sitting on an inside seam below a riffle where the water was slightly deeper than the silted in pool. The boulders I had witnessed smallies amongst in the Spring were buried in silt-completely gone.

I tight lined the FnF jig, the fish didn't move for it. I moved it in closer and let the jig sit. Nothing. Must have been 4 or 5 minutes of playing with it when the jig got swept into the fish. I set the hook and the fight was over before it began. 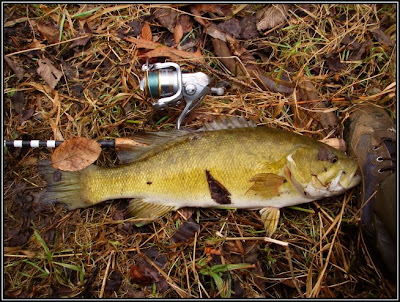 I think this is a female I witnessed spawning in the same spot earlier this year. The fish was in bad shape. One eye blind, a spine wound that looked like a heron stabbed it and some messed up scales, eroded tail, skinny. Clearly on a downward spiral. Here I was witnessing the formerly massive fish's end. It measured well over 20" without a tail pinch. I got the fish back in the water quick. It swam to a new position. Surprised to see it out in the open like that. 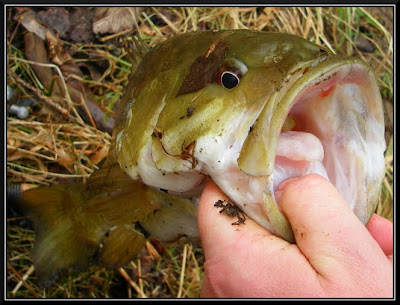 The next cleft I hit produced two bites. A miss, then a second float dunk that produced this 18" SMB that fought very well. The title pic at the top of the thread.

I walked another 2-3 miles looking for more spots. No more bites. Definitely concerned with all the silt and two large thin fish. Still, a couple more 18"+. 11th smallie in 2009 over 20".

Walked way too far, which of course made me sweat. A lot. The problem with this stretch has always been the massive distance between good holes. It's worse in the Winter. I maybe fished for an hour today. Walked in the woods for 2-3.

Good to get out and exercise in December. Skyline Chili supplied the refuel after.