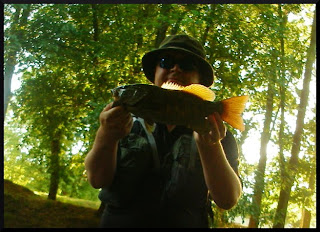 Started off slow when I stepped in the water. Found low, stained with algae, next to no flow. Decided to throw a Sammy 100 and cover a stretch that has produced 60+ smallies in 7 or 8 hours in the past. Checked for some other bites, but it was pretty much dead until it got closer to dark. Only picked up a couple of skinny dinks and a 13" who blasted and missed Sammy out of a rootwad. I threw on a Fluke. The aggressive fish picked the floating weighted fluke off the bottom only a few seconds later.
Mostly found bass near Oxygen sources or steep gradient. The above 17"er destroyed the Sammy in an eddy.
Missed a large fish who destroyed the surface and did get the bait. I could tell the hooks dug him so a follow up with a fluke probably wouldn't work. When I looked at the trebles, 4 out of 6 had slightly bent micro tips. Lucky Craft puts very sharp hooks on the Sammy, but they don't last long. I highly recommend changing the hooks out, if you don't, it will cost you like it did me tonight.
Straightened the points to the best of my ability. Proceeded to catch a couple of 16"'s and a 15". These fish got really violent. Like dropping a brick in the water on strike. Cool. Power walked back to the car throwing a buzzbait.
Speaking of which, man, buzzbaits have been bad again this year. Had one good day with them all year.
11 SMB in 2.5 hours (17, 2-16", 15) only a couple dinks. Rain please.
Posted by BT at 10:53 PM