I've come close to 22" on two occasions, a hair short on each time. An Indiana river fish approaching 23" is something I'd joked about retiring over, but I meant it. I'd written off the chance of it ever happening.

My fishing time limited the last two years, I none the less headed out for a wade one Fall afternoon. Fallen leaves were a factor, the stream wide, and shallow. Water levels very low, necessitating sneaking softly afoot. The sun made the fish very skittish in the clear water and the shallow runs populated in warmer times of year were mostly empty, if not close to a deeper Winter over hole.

I made long casts with a Sammy 100, a lure I'd consider myself an expert with. It's fun to cast, throw it a mile, skip it under tree limbs, basically, don't spook the fish by casting a long way to get to them. Make lots of accurate casts, let the action do the work. Hundreds of big Indiana Bass on this lure.

A handful of spunky smallmouth came to hand at a large pool filled with fish. In pools like these, gaining an overlook can tell you everything about how to fish it that day or in any future trips. I saw hundreds of rough fish suspending in the deepest water, 3.5'. To one side of the 70 yard wide pool were some laydowns. I approached and lined myself up to bring the lure straight down a log parallel to it, when a breeze to the lure well left of the intended target, I had to steer my rod right quickly. This caused the lure to land at the end of the log rather than the front. To my surprise, it was immediately nailed by a large smallmouth. I'd guess in the 19-20" range. It quickly got airborne before I was ready and was gone! Tip of the hat to that one.

I started to really get into some fish at the top of this large pool from dink to 15", when the river turned and the sun got very low. I had turned a corner and the 80' cliffs now covered the river in shadow. Worse the low sun made it so I could read nothing in the water. Almost blind. At the turn and cliff was another shallow pool. It was filled with fish. They were hitting and missing the Sammy in the low light at a very pleasing rate. I rang them up along that cliff wall like the Terminator. Maybe a dozen all told. Then I started casting towards midstream and a disturbance upstream.

Woosh, Woosh, Woosh! A very large fish came out of the water on three occasions in the first cast. I was stunned by its size. I make another cast, Woosh, Woosh, Woosh, fouled on a leaf. Recast. Woosh, Woosh. It's the same big bass chasing. Only this low light is giving us both a hard time. On the next cast, I bring in a 15". Smallmouth must be chasing baitfish schools. Moving up 50' or so, I duplicate the idea in the earlier failure of bringing the lure side by side with a laydown. Woosh, Woosh. Leaf. Quick recast. Woosh, (nuts!) Thunk. Fish on this time! Judging by the bend in my rod, a monster. The fight is incredible. For a moment, I'm wondering if this is a stray muskie. After several long runs, the fish is in sight and it is truly huge. I notice only one hook is in the lip, so I am walking towards shallow bedrock to get the fish on its side quick. I haul the fish there with all the protests you might expect, when suddenly, the hook pops out. I'm on it quick.

The largest smallmouth I've ever seen. Seems nearly 2' long. When I lay her on the rod to measure her, she well exceeds my 21" mark and the 22", unused, has rubbed off over time. I take out my sharpie and carefully mark the fish's length, tail pinched and mouth fully shut. 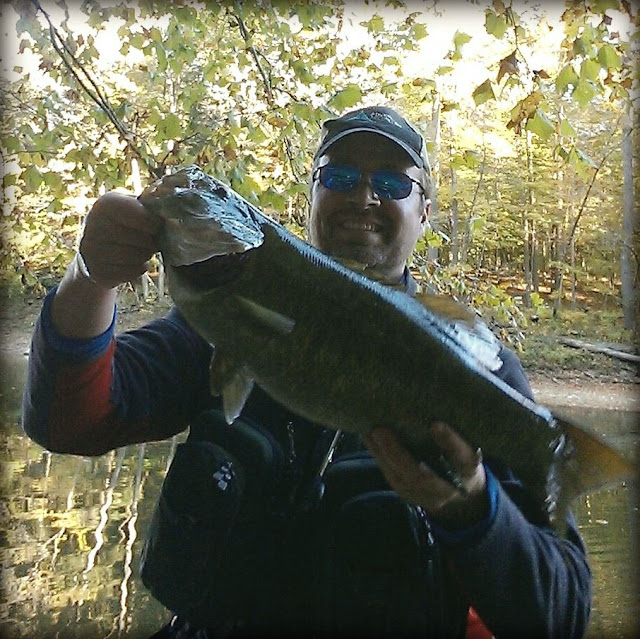 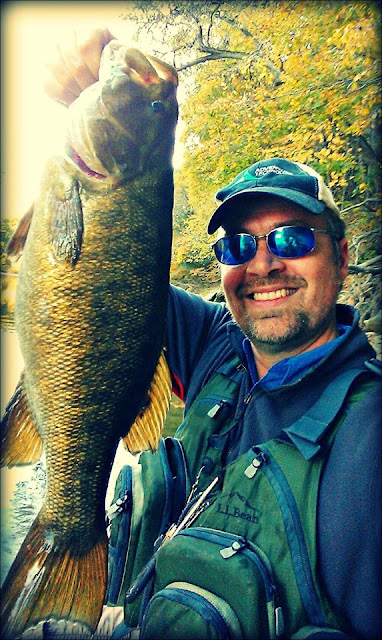 I go on to catch more smallmouth upstream and I spot the reason for this fish's dramatic growth: a big ball of 4" shad about 20' across! I head back home with the very real possibility that I've eclipsed 23". Texts and calls to friends on the way home

When I get home an hour plus later, I walk into the garage and lay the tap to my rod mark. 22.75". No need to retire! I have to say, nearly 2 months later, I'm still on Cloud 9 about this. Man, it has been a lot of effort!