Got out for a 4-5 mile float today. The water was up and murky with visibility at 6". Current was busting along at 600 + normal 200-300.
With the water up, I assumed there wouldn't be fish in the current (this proved to be true) So I looked for slow water areas next to or downstream from a current break.

Started out slow when I hit an area that had frothing water coming into the river from a drain pipe on the slow side of the river. I had a buzzbait on and picked up a 13 smallie near some wood. That was an attention getter. Often times, one fish gives away the location of others, and this was no exception. I love using buzzes as a search bait. I've learned a lot this year from their use. The fish was caught banging a Wolkabuzz off wood.

I often see shad in their hundreds near such as areas, so I decided to fish downstream of it, and though I saw no shad in the murky water their were fish hitting the surface every few minutes. I switched to a zoom fluke jr (albino) and let it drift. Then my line jumped. I set the hook - yes! I fought a pig for the next minute. When I landed it, the fish came in just shy of 19". 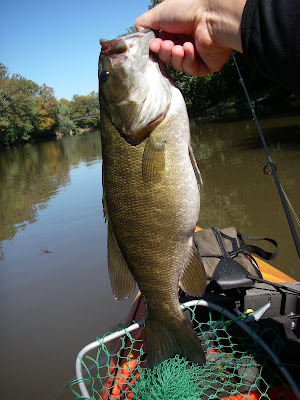 It was hooked solid in the lip, must have hit an artery as he bled a bit from the mouth. 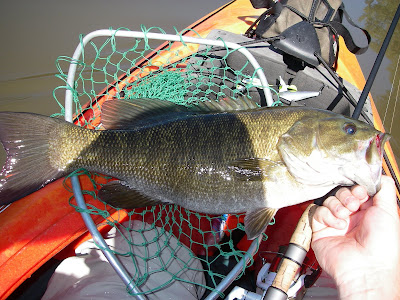 Now I had caught a 19" and a 20" last time out on this exact stretch, this guy seemed a half pound heavier than either of those.

Tossed the fluke back out there and a couple more 14"ers. I switched to a popper and caught a nice 15"er right in front of some canoers. Then a 13"LMB and 14.5" SMB on the fluke again.

Problem was there were no more spots like this the rest of the float. I had grabbed 7 fish out of one spot in 45 minutes. The rest was a struggle. Nothing on cranks, nothing on tubes. I caught two more nice 14"ers one on a Wolkabuzz, another on a popper.

To my amazement the bridge appeared in just under 5 hours. I was home by 530pm. Quite happy with 9 bass - no dinks.

Great day to get out. Almost skipped fishing this week, but wife was kind enough to shuttle me. Quite a bit of traffic on the river. Passed about 6 other fishermen none of whom where having any success.

The only reason I caught those first 7 fish was from previously noting the shad piling up near the O2 on those drain pipes in the summer.
Posted by BT at 11:45 PM