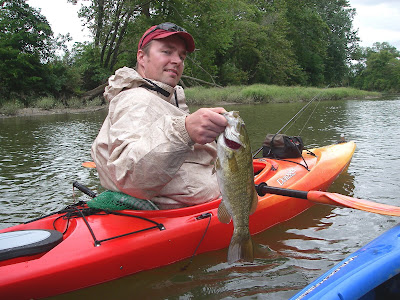 Wool(Mike) and I got out for a yak on Saturday, got started about 9 or shortly thereafter. Flow was up a bit, and there was green stain to the water . Visibility was 2ft.

I didn't know what to expect with the rain and change in temps lately. We decided to go for it despite 80% chance of rain and 20 mph winds. Had a new kayak that needed to smell like fish.

Fish were aggressive, but hard to locate with the flow up early. Picked up some nice early fish on tubes (multiple colors). Success came when I went to 3/16oz vs 1/8oz jighead. Fish were caught near calm water areas next to current and occasionaly in the middle of nowhere chasing them down. Pop it and drop it worked well. Caught this nice 18" on a smoke tube off some riprap. I was actually targeting a small point when some small voice told me to toss over by the dumped sidewalk section. This fish fought like a maniac. 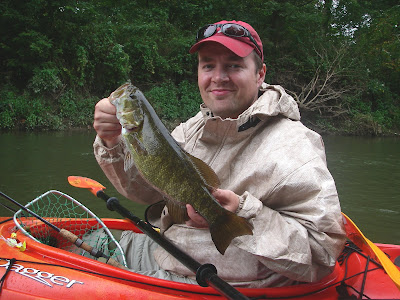 Thanks to Josh, I worked a lot of cranks today. Picked up 10 fish in the last .5 mile of the float off mid river bolders and current breaks behind wood. On a blue/silver LC crank. Fish were slamming the bait. They wanted a tight wobble over loose. One was another 18" from behind more mid river bolder action. 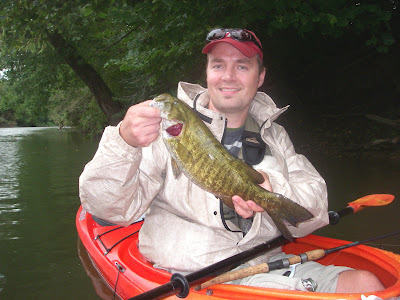 Then this guy happened.

Mike managed to shake it loose with some plyers. That's when you know you have a good fishing partner, takes pictures of your fish and unhooks angry reptiles! Cheers, Mike!

Mike stuck with the buzzbait most of the day and had some good fish on it.
Posted by BT at 9:29 PM