Got out with INSA board member Zack P. Here's his report:

BT invited me along for some FnF today. I wasn't sure about taking the day off right after having Presidents day off, but the cabin fever from not having caught a fish since November got to me, and I found myself driving to the middle of nowhere to meet up with Brenden.

I was so excited to get out, I got there way early. BT finally arrived after a brush with the fuzz on the drive over.

He had a few spots picked out to try. The first few spots produced nothing, so after a while we packed into my little car a clanked and clunked our way to another spot(anybody know a good place to get shocks replaced?)

Things weren't looking good at this spot either as we tossed bobbers around for a while with no response. I mentioned something about putting on a tube, and as I started working on tying one on he pulled in the first bass of the day on the tube he had just clipped on (damn his snaps). Nothing else happened in that hole so we moved on. 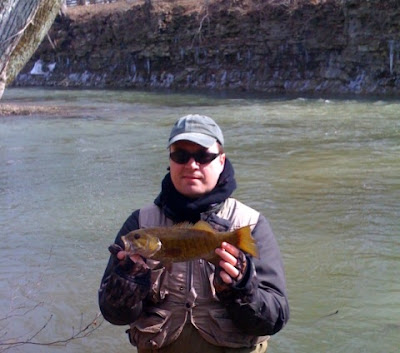 At the next good hole BT caught the first fish of the day on FnF. I had a tube tied on, and was slow in getting it changed, and next thing I knew he had pulled in 3 fish in 3 casts 15-16.5". Once I got rigged up with my fly, things slowed down (spooked by fighting fish?). After a while we decided to move again and headed back to the car. 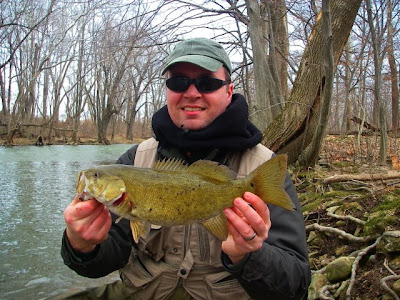 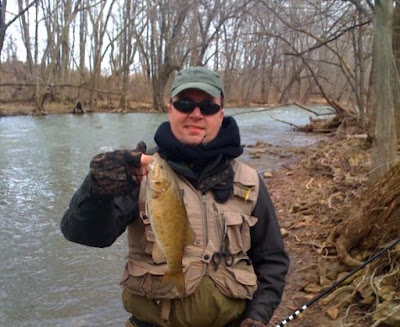 Clunk clank clunk and we're at our next parking spot. Only problem is that the next spot is about 12 miles of hiking away. When we finally got to the hole we imediately started catching fish. Floats were dunking left and right. In about 45 minutes we pulled 9 fish from that one eddy. (4 for me, 5 for BT) almost all fish were around 15 inches. (maybe a 16.5 for BT?). Bite finally died so we crossed the stream and hiked to another spot. 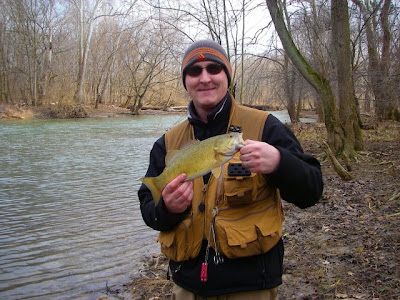 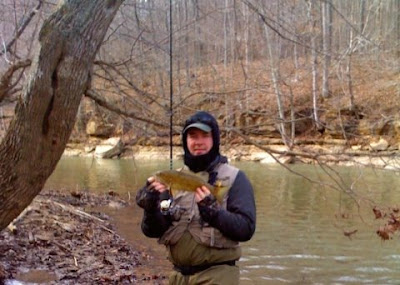 No luck at the other spot so we headed back. Stopped back at the money hole to see if some of the fish had turned back on. They had, at least to Brendens fly. Not sure how many more he got, another 3 or 4 I think.

Finally packed it in and started the return 25 mile hike back to the car.

Had a great time. Great to catch a fish again after all that time. Ended up with only those 4 fish, missed a few others that I should have had. I think BT ended up with something like 14 fish. I was skeptical of him using a snap with FnF (as if I'm an expert) but he convinced me. The fish weren't bothered by the snap at all, and it allowed him to switch out between lures much faster which helped.

Thanks for the invite BT! Had a great time!

Email ThisBlogThis!Share to TwitterShare to FacebookShare to Pinterest
Labels: fishing float and fly