6/5/11- Water came up and stained due to last night's tstorms. We hit 2 streams with decent results in each on crankbaits, wakers, tubes, buzzbait. Visibility 12" in the first, 16" in the second, larger stream 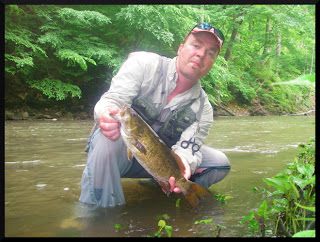 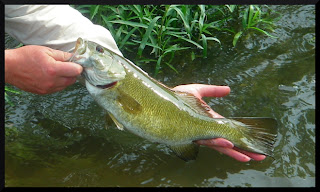 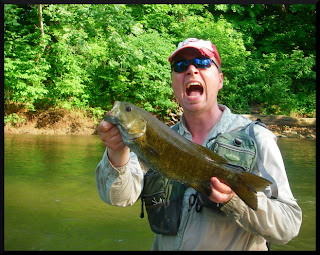 The big boy was caught off that white cap area in super quick water. Fought like a devil in that current. Mike didn't make a cast over there, it looked too fast, but I remember a couple years back we hit a bunch of dinks in the current there, so felt it was worth a throw. Like a lottery win to find that fish there! 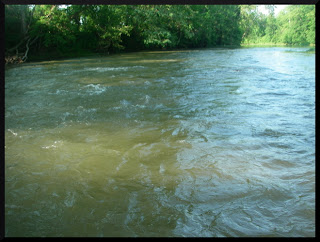 
6/4/11- Got on the water about 12:30-1. Targeted near riffles. 15 in the first hour with a nice 19"er while people were kayaking by. Up a half mile then down a half mile. Got 30 and called it quits. The big boy looked cool, but all the fish were crazy head shakers with the sharp trebles today. I dropped him before I could snap his mug. 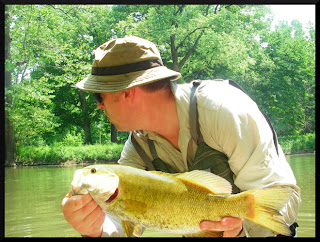 Lots of fish on nests on the slow sides of wide pools. They were everywhere, but action in the faster stuff and mostly shade worked. Stayed in the water and kept cool. Wasn't too bad except the gnats. Lots of decent 14-15.5" smallies, couple of 16"ers, a 17.75" and the 19". One on a crank, the rest plucked baits on splashdown or slightly subsurface. 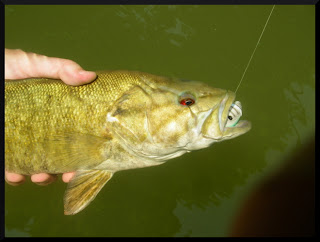 Of note, not one apparently pregnant fish or worn fin. I think they dropped the load this week and the males are guarding nests.

I had them patterned, but opted to go home and rest up. Been doing too much floating and the current was fast as the 97F heat was wearing.

Recap: These two days were quite enjoyable. Aggressive bass hitting surface/subsurface reaction baits, then the stained water and more of the same plus a crankbait bite. I am really getting the feel for the square billed, wide wobbling crankbait. Smallmouth were rocketing out of the water like crazy.
Posted by BT at 11:47 PM