So yesterday I had to put some pressure on the leader by attempting 5 smallmouth out of 5 streams in one day. It evolved....

Left the house shortly after 10:30am with the initial plan of catching a couple pigs or so and getting back for dinner. Then I thought, why not do something different for once?

An idea formed. The mental calculations of my route kept playing in my head like a day's fish count. Over and over correcting itself when a better optioned pined in. Started out as a 5 stream attempt, but as I completed each task, others came in reach and past wades or floats gave me a good idea where to try.


A combination of letters like a cosmic constellation came to mind along the road as NIN blared Industrial Goth: *S>M>K>D>W>R>T>W>L>S>L* or S2W2L2KDRT. I calculated pi and the more or less best route and the quickest spots to pick up a solitary smallmouth from each stream. My goal, destroy INSA Gold Challenge 5 stream challenge. I didn't want the 20 points, I wanted all I could gobble. I would hit forks and tribs, big and small, stop for one cast at a bridge, jump in the brush and hope to get lucky, quick then drive quick with my GPS to the next spot.

First stop, where a bridge had recently been removed. Jaw dropped. Brown stain and 12" of visibility. Stream historically has very clear water. In fact, you can usually count on it running cleaner than most. Nothing up top. Moved to a spot that has held fish in the past, throwing white chatterbait. It was good to feel a solid connect and nice 15" fish to hand not 10 minutes into the journey! 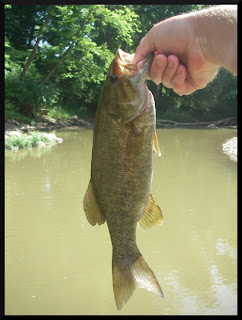 Got in the car and raced off to the next, which was running green stain and very little flow. Vis maybe 14-16". Took a while wading downstream at a new spot, finally found a little turbulence  and promptly a 10" smallmouth bass: 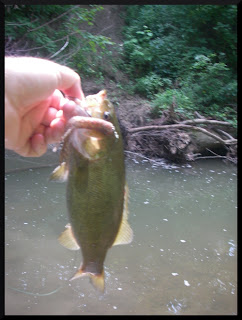 Next creek, a quick catch on wake crank, then another. Went upstream a bit because there was a fork that had a run come into it. Wanted to see if I could get a quick score at the junction. No dice. Was filled with chubs and shiners. There were holes, but didn't see any smallmouth bass. Got out and caught another on a Sammy on the way back. 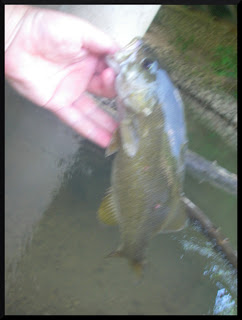 
Took awhile, but I played a hunch and hit the outlet of one creek and the big W-bash. The creek water was causing a clear mud line. I stood between the 'Y' sticks and was questioning my logic when: several nice smallies took issue to my Sammy, but appeared to be sun shy (pulling away just short). Had one 14" flop off, then caught a 5" spotted bass. Didn't think to get a picture, cause surely I wasn't gonna get a rock bass and LMB, right? Then this guy hit a Sammy. Ooh. 5 Bass Indiana Grand Slam possibilities swirled in my head like dancing sugar plums.Random White Bass! If I could manage all 5 species in a day, I could nab another 15 points. 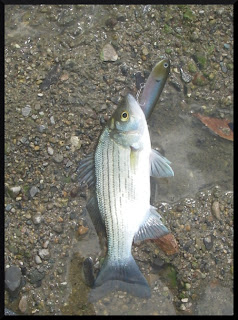 Then I had to get a LMB, but couldn't let it effect my quest for the 5 stream catch? Maybe I could do more than 5 streams? Dink smallmouth fell to a grub in Wabash and then another in the creek. Score and score. My first ever from the Wabash. Wonder what would happen there at night? Probably some good things. 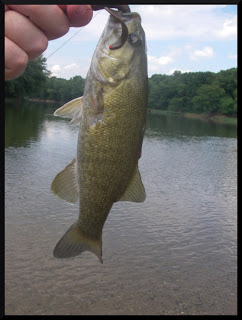 At this point I had 5 streams. MORE. Go, go , go ! I could get 10 streams (+2 Gp for each stream after 5) and maybe a Grand Slam Plus (Rock Bass, Largemouth Bass, Smallmouth Bass, Kentucky Spotted Bass, and White Bass). Started formulating where I could get a Largemouth bass in a stream in a deep corner of brain... Hunger, hunger for more streams to score in. Going Out West played...

Close to the Tippecanoe river, so added it to the chain of streams, mapping out scores in my mind and had fun adding the points over and over again, but first I'd go hit a small, small flow. Climbed down a sheer mountain side to catch this guy in stream #6: 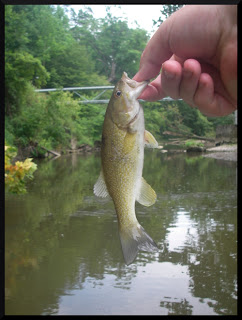 Annoying little buggers kept slapping and I finally got one of them. Creek had no holes, but great habitat and never 2' of water. Needs jackhammer work to become stellar fishery. One. Out.

This was actually pretty fun despite the lack of fishing and lots of driving. At least I wasn't getting tired and had tunes. Stopped for Arby's. Old school Sabbath for a bit...Then some Bad Seeds.

Tippey was a real test. Got in at 18. First Sammy cast got banged by this nice brown fish: 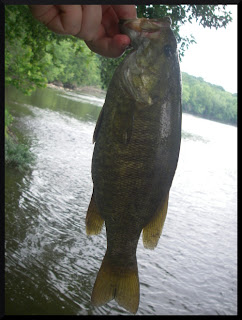 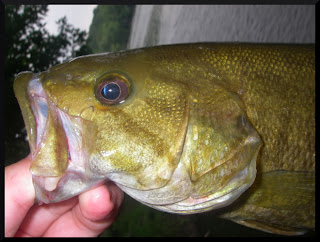 More aggressive attacks and a huge fish followed the bait to my feet. I had scored and had to leave. The water was incredibly warm and dark brown, but decent clarity. Current was fast in the center and smallies were aggressively feeding in the slow water areas. Wanted to stay so bad, but I was on a mission, pigs be damned!. It was around 6pm.

Off to the next micro stream, #8, got out climbed down behind enemy lines for a quick smallmouth bass CIA mission, wakecrank downstream, 3 quick bass. Water was red orange! Yech. Score. Out. Drive. 630pm. 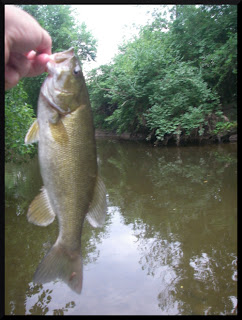 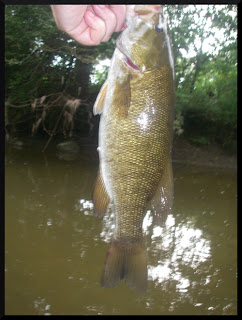 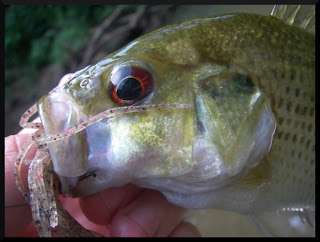 #10 was an easy one. Luck would have it my route took me right past a nice riffle and that is all she wrote with this one eyed 15" I have caught before: 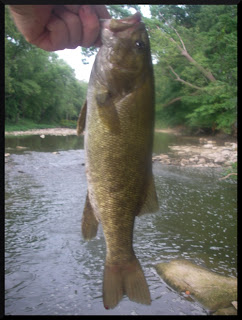 #11 was right down the road and I hit a nice LMB and SMB under the bridge on WC. Must have been having a pow-wow under there. I had hit LMB near this oxbow in the past so I figured it was the best shot for Grand Slam finale, if not I had an area of #10 I could count on for a LMB. Went 16.5 with huge mouth. 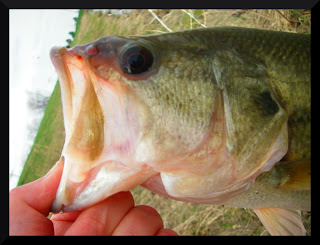 The Smallie made me drop all kinds of things in the water scrambling for pic #11. Wiped camera off and saved a couple lures from floating downstream after I relipped her. Went 17.5". Caught another 5 SMB and went home. 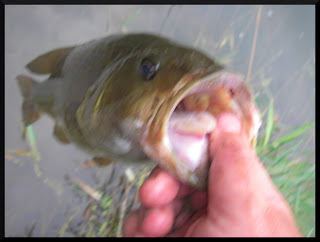 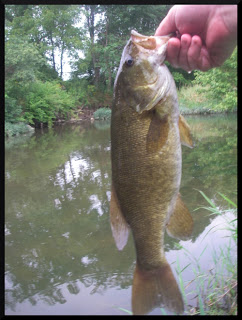 Whew, that is done so now I can get back to normal fishing