Decided to fish on Wednesday pretty late. Swept by Fall Creek to get the 5 streamer Gold Challenge started close to home, casting from the walking path. Several lazy slaps at Sammy and I had to move on, scoreless again.


Avon traffic blows. Called a bunch of you up on the drive. Took forever to get where I was going. Sarah took the GPS to San Diego and my Gazateer was missing the page. Didn't remember which way to the next bridge. When I got to the take out I saw minnows getting busted from up on the bridge. Left the bike thinking I would be right back. I never came back.

Hadn't fished this stretch in 2.5 years. Not much depth to it, bedrock, chip rock, shady cliff to one side and substantial silt in straight aways. Mostly a nice walkway of bedrock the whole wade so ground could really be covered. Ended up going nearly two bridges.

Sammy. Oodles of aggressive, hard fighting bass that would jump insanely high from shallow water. Pretty cool. I feared there might not be any pigs on this hard hit stretch.

Most of the fish were 11-15" on the day. One long stretch where there was nothing. Just weren't any fish there. When the habitat improved, smallies were aggressive

Largest fish on the day was this lump tummied 17" with what looks like a madtom catfish in his gullet. Couldn't have eaten it long ago and was already coming for more! 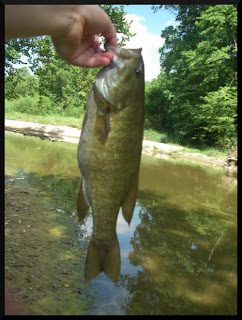 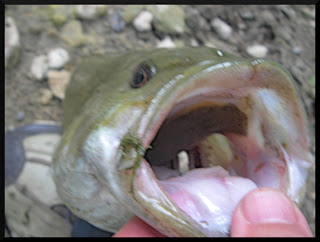 Brown stuff is the algae I dragged her through during the fight: 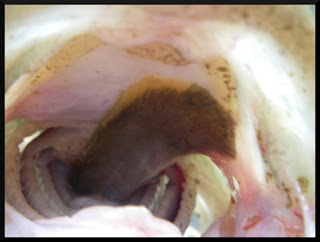 Caught my 5th double of the year on a Sammy: 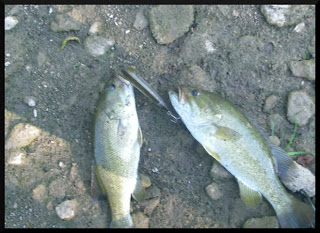 Was really burning the daylight back when I ran into a couple of other guys throwing spinners about 20'. Showed them the Sammy and 7'6" rod I was using. Turns out the guy owns land at the bridge I parked at. He was decrying all the pressure the tiny creek was getting and people removing bass. I was at 53 bass when I met them and promptly in the middle of power walk return trip with Wbz in action. I caught two 12-14"ers immediatley at the push water, doubling up the size of the fish they just caught and probably giving them an "aha" moment. Always good to be nice to land owners to get that friendly treatment.

On the power walk back, I picked up a few nice fish tossing buzzbait after the sun had gone down and the headlamp came out. The last 15"er of the day in the black.