Fished briefly Friday. Slippery slopes. As ground, still very warm, made for some hard stepping. I'm a pretty agile person, but I ended up butt down on the grounds sliding nearly into the river. Twice.

Water was up. I like higher water in colder months for a couple of reasons. First, it pushes fish in close and makes them bunched up for easier searching. Second, Higher water tends to be clearer in colder months than warm months (water clear of algae stain). Best of both worlds: Smallmouth are packed in tight out of the faster current and can see! We know as fishermen fish are cold blooded creatures.

So it was 19 F and a little windy. Visibility was about 12". Once my descent towards watery depths stopped on a root, I just sat there and fished. A 13" golden smallie was followed by a larger 16" fish. Both came from less than 10' from where I sat.

Another thick 18" beautiful fish came to hand. The float barely moved. nailed him. Later another 17" fish.

Saturday Bill B was down from South Bend and wanted a shot at a fish so we hit the same spot. Water had dropped significantly due to extreme cold. It was 19 again, but the creek had started to ice on all eddies. Ours was iced over. I pushed about 50' of ice off into the current and we left for a couple hours. When we came back it took a while to zero in.

Finally my float went under water a little and I nailed a nice 17.75" smallie. Soon Bill also had his float dunk. Immediately on the surface and larger still. He kind of horsed it too much and the tiny ice fishing jig popped out of its mouth! AHHHH. 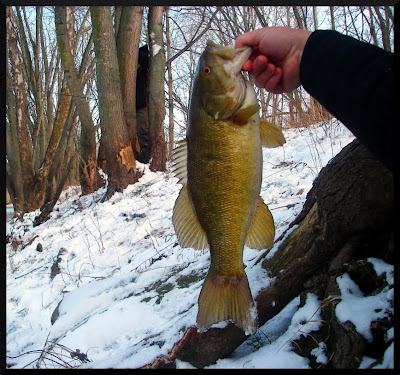