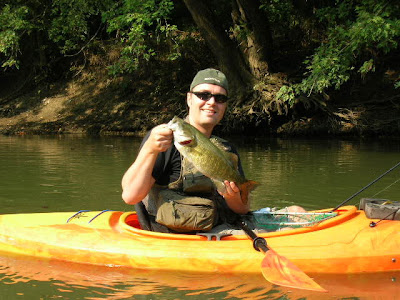 Met up with Matt, JasonII, Gary, and JoeHoward for a Clisterfick (X?) this morning at 8. Got on the water 9ish.

The water was stained, with visbility about 18". Wading felt good in the low 80 air.

JoeHoward, Gary, and myself fished a section of stream in the midst of a clean up, which was not a problem, but for the AIRBOATS that passed a dozen times. Headache. The fishing seemed off.

Joe caught a smallie on a red crank that had lampreys attached to it.

A fish ambushed a red Lucky Craft CB 1-2 foot diver off one bank near current, jumped and peeled drag like crazy. By the time I landed it, it was my largest fish from this flow, 19". 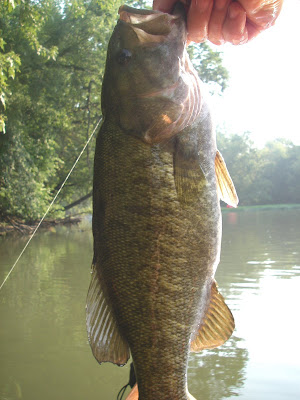 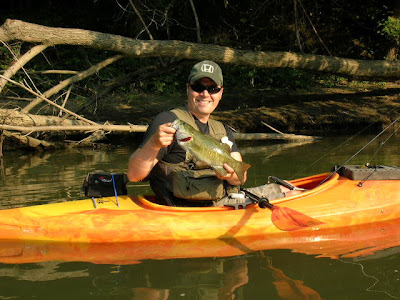 Not long after that, I was casting downstream at the start of a chokepoint in current when my Red Lucky C CB stopped again. I thought it was a big cat at first. It turned out to be my first 20"er of the year and my new record for the stream! 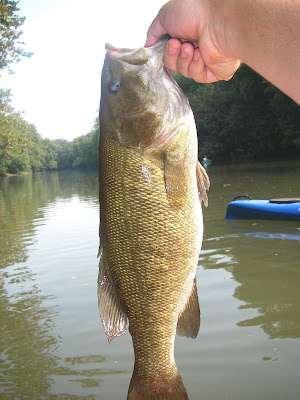 My pics are not so great because the sunlight made it tough to see the lcd, Joe snapped a couple that may have turned out better.

What the hell was going on?

The rest of the day we picked up fish here and there. Slow. Gary caught a Sauger, a couple of Bluegills. Around 10 fish total which were mostly dinks. However, Gary had a fight with a mamouth something under a log that broke him off. Good news was JoeHoward started catching a few more too. Joe caught 5 or 6 on cranks throughout the day.

At the end of the day (6 hour float), I caught only 7 bass, 5 on red cranks and 2 on tubes. But I could care less. Fish wouldn't touch the buzz for either of us.

Both Gary and Joe are good guys to float and shoot shit with. By the end of the float, we were burnt. Between sun, parents yelling at their kids, and AIRBOATS VRRRRRROOOOOOMMMMM! It was great to see people cleaning up the river. Good job guys.
Posted by BT at 11:35 PM