3" fluke violenty jerked then allowed to sink triggered most strikes. Spent too much time in the penalty box this AM. Finally hit a nice sycamore with boulders just downstream. Nailed 6 bass and a Goggle eye. The bass all fought like mad. The largest came from the front of the sycamore when the fluke drifted down in the water column.

What a fight. It ran and ran, almost swam full speed through my legs, went airborne 4 times and caused me to fall down during the fight. Looked thick, I confess I was surprised in only measured 18.5". Absolute riot. 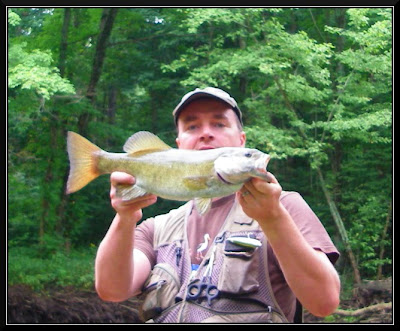 Carp were rutting in push water above, Pulled a 14"er from their wake on fluke jr.

On Sunday, I got out to a small stream I've been saving all year by 7am. Characterized by riffle pool after riffle pool. Maybe 25-30 in a 3.3 mile wade. Water was clear to at least 2', but the lack of light made it hard to see anything deeper. Weren't many deep spots. Bass were found laying in deeper pools around sycamore rootwads. The stream 90% covered in shade, so even if it was sunny out the water runs cool. Most bass were chunky like lake fish, even the dinks. Tried to take a picture of a couple of these rascals but they wouldn't hold still.

The fights were unreal. 13-14" fish that fight like 16"'s in other creeks. All this with very little current.

The challenge was to stay stealthy. Water typcially was less than a foot deep. Walking on creek bottom was like grinding coffee.

3" fluke junior again the way to go. Baitfish seemed small in this stream. Nailed a skinny 17" at a choke point on a Sammy 100 and a couple fish on dead sticked tubes, but it was the fluke they wanted. Later another 17 off a sycamore. At first violent jerks, then killing it worked- mostly for dinks. 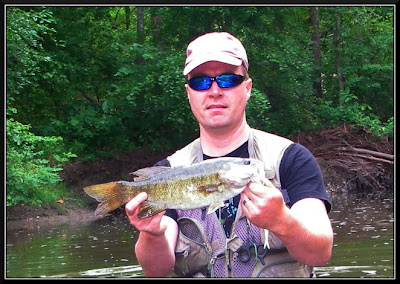 As the air temperature warmed up a bit, just letting the fluke sink got it bit. A few Sycamore root wads held 4-5 bass each. Didn't catch much off laydowns.

Dropped by a creek tonight for a quick wet of the hook. Fishing was slow except for this 18.25" fish on Sammy 100 and another large fish that rubbed my popper off on a log. Last 10 minutes before dark the bass went nuts for buzzbaits violently attacking the bait. Missing. 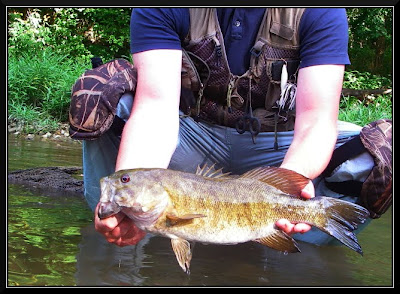 With the INSA rodeo coming up this weekend, I am setting a goal of 200 smallies for the week. Not a bad start.
Posted by BT at 10:13 PM