Hit a creek at about 1800 CFS. The hope was this incredibly slow thaw would hold back the silt from the streams so the fish could see my baits and the smallmouth would be packed in tight along the banks. When I got to the stream it was high and fast, maybe 2' over summer flow. Visibility seemed to my eye to be about 6-8" but the water did have a green tinge to it. Hard to tell with the 14 straight day without sun. We've had how many straight days of 35-45F temps and the ground is still mostly frozen! Today the lack of sun was a favor, as the rivers surely would be a torrent of chocolate milk with any kind of heat from the sun.

The first two spots produced nothing; in fact, there was just too much flow for smallies to hold there. Moved downstream and mostly lost lures. Tried dragging a tube, but they hung up on roots and were lost. Curse the 8lbs mono. My tube jigs were used up, I'd have to make do with FnF in 8" of visibility. Went downstream for a couple more holes, but again the flow was too much, this time bramble kept me from fishing parallel to the bank.

Discouraged, I was about to leave, it was nearly 2 o'clock. It had been 22 days since the last smallmouth, so figured I try some wider pools. The first is shallow bedrock flat below some shelves where the stream forms a couple of riffles. I found a couple of years ago smallies will congregate to one side below the riffle during high water, especially with some turbidity. After about 20 minutes, my float dunked and I landed a 12"er. Stuck with the spot for 3 more from dink to about 13.5". Ok, this was good. Patience I can have, if I know the fish can see. 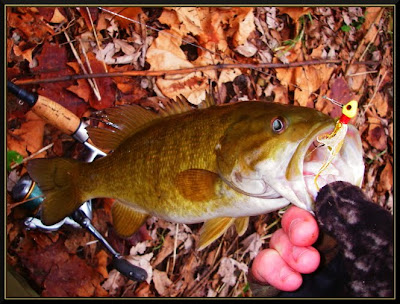 Somehow, I was able to cross at 'shallow' areas to get to the other winter holes. The water was up 18-24" and class II-III. Thanks be to felted boots!

At the next spot, a sycamore and minor clump of log jam to one side create a nice current deflection leaving slow water to one side. With the river up, the slow area was 1/3 the size. I caught 4 more SMB dink to 13" and a Goog all close to root cover near the bank.

Really surprised at the lack of decent size bass. They must have eaten yesterday. Time to bring a tube rod with braid; I'll not be losing three tubes like that again.

Going tomorrow, need to get a big'un or two. I bet if the sun was shining, visibility might have been 1'+