I've been commenting how many stream fish populations in Indiana were decimated by the floods of 2008. Since then, it has been remarkable how small the bait fish  are in many of our steams .5-1.5". This is not what I remember previous to the floods.

2009 saw a 3" fluke bite to draw some action, a 5" fluke, so deadly in 2007 became hard to get bit on. Was this because the standard smallmouth meal has shrunk in size?

So, I saw the 1/8th oz panfish chatterbait in Wallyworld, thinking I might downsize from the large 3/8 oz chatterbaits that I make myself... 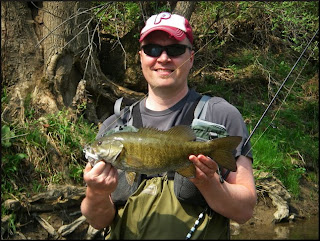 This fish was close to shore in an eddy. I actually saw the boil and strike on the 1/8th oz white chatterbait.

We took a break and within a few casts, another 18"+ SMB came out of the center of the stream: 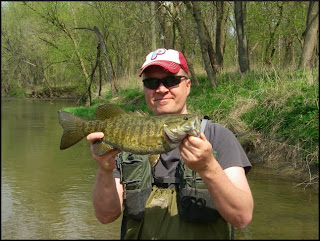 Used the white bait to drop over boulders slow retrieve, sometimes ripping and some times allowing to drop.

Mike and I had some excitement when he hit a ridiculous 15"er: 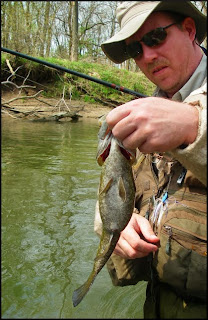 Then I hooked a 17.5" fighter dragging a tube along a seam, it was followed by a couple of suckers and a larger black smallmouth that contemplated, it's mate's fate before darting off. 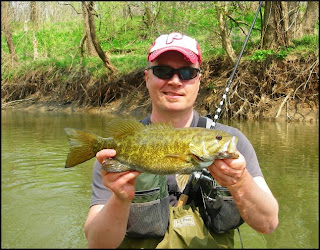