The pre spawn was hardly a whimper this year. Now is my least favorite time of year to fish for smallmouth bass. Are they spawning, are they not? Funky, for sure. Big fish disappear only to appear again a month or two later. This spawning funk can go on for a month or two. One day they'll come out of it and rage for food the next. No rhyme or reason. I try to fish in current and ignore the typical spawning eddies.

I am hankering for a numbers day like crazy, since topwater bite has turned on. Spurts and fits, drib drab, starts and stops. Ooof. I would quit fishing for a couple months entirely, if I could. 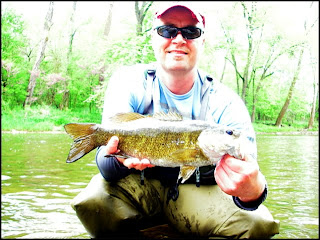 I headed out to again check on our friends the WB's. There was some action, but mainly the small fish 5-7". I left and set out for smallies, bereft of willpower for anything but hounding my single species obsession. Like Gollum and the ring, my fate bound to a blow of the wind.

I threw the Sammy 65; a 2.5" 1/4 oz walk the dog topwater. A kindly dink hardly bigger than the bait showed me some mercy, so I kept with it. One thing this small topwater stick does well is cast and land softly. Sammy 65 has a downsized appeal that mimics the size of the minnows observed. A nice rattle in the bait gets their attention.

Water quality was great and stream was in great shape, despite brown algae now covering all the rocks and making them slippery for felt soled boots. A few unattended beds here and there. Lots of 15-16" fish staging for something. 12-14"ers manning the bed areas. Guarding or waiting for a girl? They didn't seem to stick closely to the beds so I guess waiting for a female.

For the first hour, Sammy 65 was hot. A 15.75" smallies destroyed it. Later a couple of 10-11"ers, then this 17" slammed the bait and went airborne before getting in the fast current pulling drag and putting on one hell of a show.

Next cast, I let the bait sit a while "BAM"! Destroyed. Another terrific fight. 16" fish. Another 15" on mini white chatterbait, a dink. Some well intended misses from small fish, another 15" and a 13". Even caught a Longear sunfish, couple of rockies, and shiner.

Fish got spooky. Lost Sammy 65 out of my pocket somewhere and couldn't get bit again.