Elkhorn Creek, KY. Fantastic looking river. Think we got started around 6:30. Didn't see any silt until the end of the 9ish mile float. Place had a different smell... kind of like baking rock or a mine shaft...

Early on we got some dinks, then it was very scattered. Cookie cutter 8" fish and maybe 4 between us 12-14". We ended with only 24 bass and 3 googs. Most of mine were on baby chatterbait, Spook Jr, or grub. Terry got his on Wolkabuzz, with many slaps not connecting. I did manage to snag a softshell turtle walking a Zara Spook Jr . Terry distracted its head while I tried to pluck out the hooks in its leg. Hard to do when the head is snapping and lunging. Floating didn't help.

I can see how each pool could hold gobs of bass. Problem may have been extremely warm water temps. It was warm like bath water. Man, it was ridiculously hot.

Tried one of the quick dropping creeks this afternoon. Thought I'd see some stain maybe 1' visibility based on gauges. Totally surprised when I spied clear water down to about 3'.

Man was it hot. Kept dunking my hat and shirt to stay cool. I was sweating so much I could not wear sunglasses and my rod was slipping out of my hand. Luckily this stream is covered in a terrific canopy of trees. It kept me and the smallmouth cooler. Creek was running 5-10F cooler than the Elkhorn yesterday.

I knew it would probably be good, when the first cast brought in a scrappy 13" on a 4.5" grub. A few casts later, I had something big pull off the R2C . Grubs were the ticket early on, but the plentiful, thick sunfish, and ultradink smallmouth got in on the action, pulling the tails off about 10 grubs in the first hour and a half. Nice 14", another on a tube and I had it working.

Hit a large pool threw on mid depth R2C. A few casts in it got sucked up by a hard fighting 17.75" Smallie that was either eating well, or still had eggs on board. Batteries on the camera were unfortunately depleted. Beautiful fish swam off to bite another day. Had another likesize bass follow a 12"er back to me then spook off. For a couple of hours, ripping the Vwake R2C and pausing it drew a bunch of bass.

Tested the buzzbait, it got bit in shallow water near riffles. Couldn't get anything to come out of more than 2' to hit it. Landed a 15" and few others intermittently. Started tossing 5" fluke and that got bit too. Several nice fish and lost the horse of the day ( I think) pulled drag like crazy and disappeared. Lost another one 16-17". Nailed a 15".

Last 7-8 SMB fell to LC WK waking the bait across the surface after 5 pm. I lost a lot of smallies today could have been closer to 40-45. Couldn't grip the rod well with all the sweat pouring. The current was just right for the bass to tear up.

Now it was getting late and this one is an ankle buster extraordinaire. I walked back to the middle bridge, hoping the road would lead back to my bridge. It didn't. Cut across a huge cornfield and headed for trees. Then my road appeared! Just as the storm came in and poured, I opened the door to the car and got in! Need a bike. Need a bike.

So last night I was wrestling with the dog and got a paw in the eye. Seemed ok until I woke up in the AM and couldn't see to drive to work. Turns out they were painting the office anyway. MC wanted to play fishmonger; we had agreed to head out around 4-5 PM. Well, no reason to sit at home and wait. Flushed they eye about 80 times and left early for the creek!

Got to the USGS gage at 2:15PM and waded down, clarity was again about 3'. Got the wake crank going on dinks early. Waded down to kill time waiting for MC to show at 5:30. On the way back up, I threw weighted 5" fluke. This resulted in a 17": 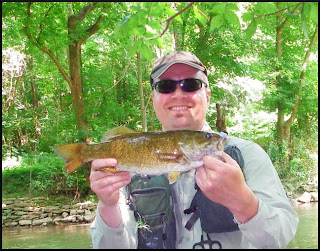 Nearly stepped on a 17-18" smallmouth in aggressive feeding position in the side pocket that spooked off. Remembered his holding position in the squarish, shallow pool- The type that seemed to repeat itself, capped off by endless fields of water willows. Would come into play later...

More wakecrank. As time for Mike to show appeared, I nailed this duo at some pushwater. 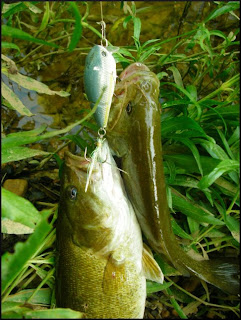 Dinks and 12"er here and there. Finally, something big hit the wake crank. Stop and go retrieve along with actually waking the bait got it bit.

This bass was short of 17", actually was so surprised when it exploded, my hat fell off. 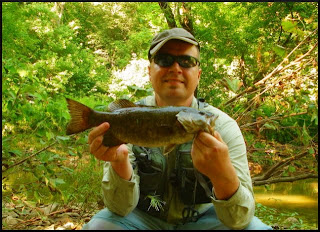 By the time I went to get MC, I was well on the way to a great day.

The fluke bite died off as the sun drifted behind the trees, but the WC bite went crazy! MC started catching fish after fish waking. I noticed a peculiar box shape to the pool and threw the WC over into some shade in what I would consider a 'side pocket' . Saw my wake quickly answered by another wake! Nice fight and a 17.25" SMB to hand. 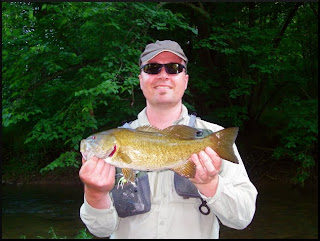 MC and I hit a pool where we must have caught 10-15 bass. Up towards the front on a shallow root wad, a big fish smashed my bait and ran straight downstream at me heading for the cover of my pant legs :o . I panicked (thoughts of revengeful fish with face of trebles jump into my legs :shock: ) and tried to fight him in deeper water rather than beach. When I put pressure on the fish, he jumped at my feet and came free. Mike said looked like an 18". Boo me.

What the hell is this? Half human/half fish? 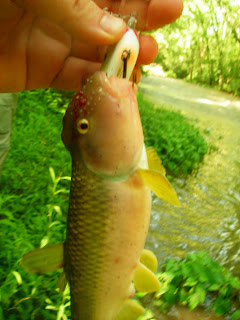 We found a bedrock pool that ended in a smashed cliff of bedrock underwater. Wading the pool, I spotted a possible 19-20" smallie, that I wasn't sure was in there. man exploring is cool.

Started getting dark and we were still catching fish with many slaps. Literally had to put the baits away.

An episode with a lunatic at the takeout put a dimmer on things a bit.