Got out for a solo float by 1230. Sun was blazing and I couldn't find any smallies in the large pools I was in. Managed 1 10"er on a Pointer 100, but had another chase from a fast run.


With the warmth, bass had moved up into runs and riffles. The pools and winter holes were mostly empty. It was windy again so I ditched the yak around 4 with one bass and a sunfish to show( both on foot) . Hit 4 dink to 13" in a fast run above a large pool wet wading. Later added a 3 Googs. Worked some riprap after 5pm and hit a nice 15"er. Headed to another rip rap area and the bite definately was on right on a current seam. Dragged a 1/4 tube. 14", 16", 19.25", 16.5", couple 12"'s. Missed some smaller fish. Carp were playing and flopping. Air was warm and water felt great on my legs. 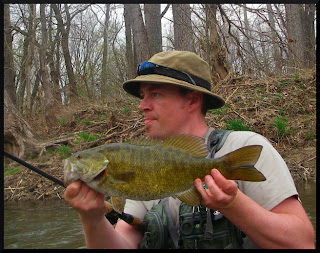 Recognized the in riffle/run pattern late, but not too late. Spent the first three + hours combing large pools. It has been a good Spring and my guesses have been mostly on the money until today. Hindsight should have said to work ambush points in shallow water near feeders bringing in even warmer water. Was going for cold big fish and they aren't cold any longer! Should have hopped riffles in the car. What could have been....