This one was a lot of fun, but started bad for me and good for Brett. All's well that ends well. I guess we got to the water around 11am. New water. Stained green 2' visibility and not much flow throughout. We set out to bike shuttle a 3 mile wade.
I tied up some loose ends while Brett got the smallies loosened up with 2 at put in. 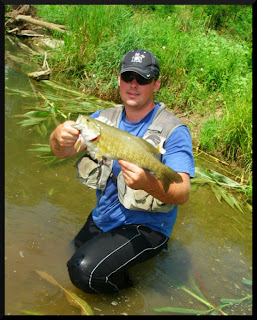 A few more SMB came to hand for Brett while my fingers were stuck in my pocket. I did get a nice 16.5" smb on impact hit CB. We'd catch a bunch in this size class today.

Brett was getting some on cranks occasionally for a while. I was getting bit most on Sammy with only an occasional connect for a couple hours. River had a lot of limbs with wood and deep scour holes. Casting for me was sub par and I kept getting wind knots and rod tip wrappings. Not good. Got a couple on a WTD popper but it didn't seem to take. Pattern was fish were of scattered location.

River habitat really started to look great about 2/5th's the way through the wade. Riffles increased, log jams decreased, and we were often in shade. Brett lost a 16" fish just before lipping. I just kept with Sammy with connections increasing but still a low catch rate. Got one on tube. Lots of cookie cutter 12-13" smb, but few dinks. Delightful.

Brett started fooling with a 5" fluke and started catcing fish. A thin 16"er, then I got a 15" on a zulu fluke, and Brett another.

Sammytime happened to the tune of a 16.75" smallie for me that had most of its lips removed by a poor hook remover. Three more to hand on Sammy when I had a large fish come completely out of the water. Viewed the entire fish tail up to head in the water.

Brett fluttered a fluke deep into a deep root wad. I saw a nice smallie come out and turn away with the fluke in tow. Another 16"+ SMB for Brett. I picked up a couple nice ones on fluke and then a couple 16.5"-16.75" smallies at the backs of pools on Sammytime. The pattern had developed. The backs of pools, but not necessarily the fronts. We each traded off dinks and 12"'s then Brett hit one short of 16" and another two as I picked up a 15" on Sammy at the back of a pool.

Later I bomb casted a 17" as we ran into bikini hatch that spoiled one of the best looking pools.


Then we found a pool 15'+ deep. I hooked up with a pig that came off to it s front, and Brett picked up a fish on spinnerbait. half mile up from the 15' hole we found two parts of the stream rejoining like a pincer. After a couple poor cast by me I hit the tail end of the pool where the swirl created any eddy. BLAMMM! Finally the bigger fish we had been wondering about. When I got it close it was really bigger than I had expected, a full 20.25"!!! 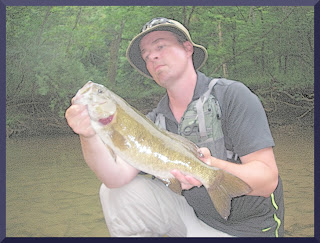 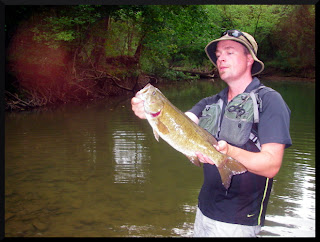 Brett fished the top of the swirl and had a giant explosion fail to connect his Sammy. A few casts later I saw another huge brown bass come half out of the water and it was at least 18", but I'd guess also in the heifer range. Two misses, two hard splashes and dejection. Brett pounded around the fish's ambush point and finally pulled in a much smaller bass. i caught a couple more on fluke, had some more Sammy action, but it seemed like they could no longer see it well enough to connect as the Tstorms rolled in.

The second half of the wade was a blast and a complete surprise. We could have had another dozen or so fish with bass flopping off or staying hooked, numbers a little low for an 8-8.5 hour wade, but plenty og 16"= and a couple of chances at real pigs!