Several things planned fell through, when that happens, it opens up for FISHING. *Interlude* Can I just say how great it is to have mowed my lawn once in the last two months?

I got to my place via giant golden octopus. Get yourselves one of these. It really helps with bike shuttles and whatnot. Slid down the yellow brick road to the creek and was immediately greeted by a wave of heated butter on my face and other moist parts. I could see out of my sunglasses less than 15 minutes today. No matter. Water was super low and fish were sucking up that breathable stuff.

Stepped a couple feet in and whammo 17"+ on impact. Off. I had returned the Pflueger President XT (blue gold) for the second time in two months. This time I picked up a Shimano Stradic. Smooth, so smooth, casts like a dream. A couple bail closing issues. But so far so very good.

At the first riffle, I must have had 15 strikes. Most missing and losing most of those who did touch the Techno2000. One was another nice bass that was followed by a larger. When I let him swim to try to hook the larger he got off. So there went a 16-17"er. 2 lost already. A bass was causing waves and chasing all over. Threw in and got a 16.99" smallie to hand.

Run and gun to the next bubbly stuff. Big miss. Shallow water. Something told me the fish would hit again since it had completely missed. Did. Green-brown mouth monster with fins. 19.5" 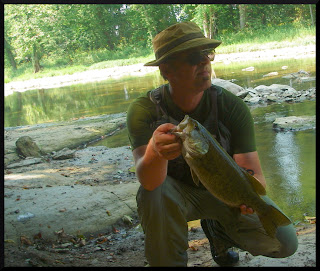 Run and gun to next bubbly. Pick up a dink amoungst many misses. Sucking slaps that wouldn't connect. SUUUUCK. SUUUCCK. SUUUCCCCK. Zilch.

Throw over by rock....KERBLOOOSHUSS!! See fish turn and gone. No more play. Couple more slaps. Run and gun to next bubbly. This is hot like being on the sun. At least there is no water to get in to cool off. 3.5 mile wade+ bike shuttle? Why would you do that?

Dink. I say Dink. Can you give me a dink now? Dink on the hook. SUUUCK. No dink. SUUUUCK. that's a dink, follow?

Then: BOOMSPLASH!!!! -Man and fish are doing the line to mouth below water limbo. Him shaking head and me counterpressuring like a game of chess and his royal pigness aims skyward to launch Techno2000 back into space from whence it came.

I look close. The FISH HAS NO FACE! Someone has removed one lip, then recently another. Looks alot like the millionairess that keeps having all the work done. It was big though. Tried to get it's better side so as not to humiliate it. 18.5" 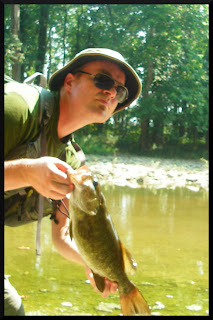 A 16" to hand. He was frisky as all creatures with energy and a tendency to wobble can be splashing and swimming back and forth trying to get free from my cruelty. Numbers piled up. I had a choice between branch A and branch B, with branch A typically being loaded with dinks and a 15"er. I went down B. I was tired of the SUUUCKS, which would not connect. It worked. The other way was the meal ticket. A 15" in some push wanted Techno M for dinner. Then a 13" off a rootwad topped off by a long skinny 18.25" 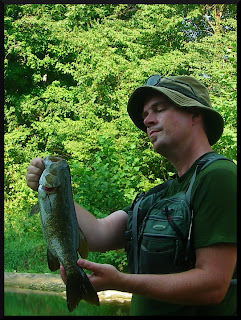 Kept working this normally empty wood along side B and nailed a 15", then a 14" then a dink and another 15". Bass were connecting now as it had passed 5 pm.

Picked this 17" off a rootwad like we used to do back in the day. It too displayed notable frisk. 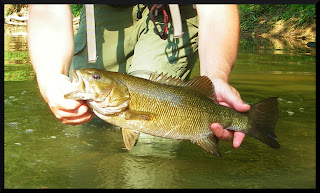 Kept going picking off a few more 10-13"ers. I was pretty beat and skipped the last pool. Got on Fishbike and headed the 4= miles back to robot car shuttle then home base. Wife had grilled me up tomato mozzerella basil grilled cheese that was off the hook. Actually 2. MVP. 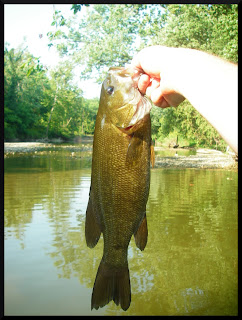