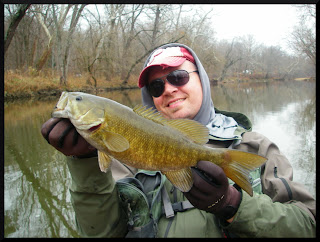 Went today which turned into a short trip. Float down paddle up. Picked up this 18.25" smallmouth which went berserk underwater.

Picked a dink after the fly bobbed over a rock. Was trying to work this ledge without being able to see it. Mixed results. Later the float dunked and a big fish of some sort was on, swam hard without budging, then came free. Felt really good

. I've been skin hooking fish a lot in the roof of the mouth. One yesterday right through the lip bone, 3mm away from a miss.

Made my way down to another area fishing slow current via still drifts past a shallow, protruding root wad. Float dunked, fish jumped and was free, another skin hooked fish! Might have to go away from the sickle hook.

Went back the original spot and picked a 14"er off the ledge. That was it, thought of going to another spot. Decided I didn't have the time.

Today was harder because there was less current and thus less of an indicator where to drift the fly. Still, I could have had 5 fish from the pool, including two really nice ones.