Another day, another float down to target pool,  drag the kayak back. On the water by 12-12:30. Brought the baitcaster and 1/2 oz jig for some of the deep, slow stuff.
Lost a big fish on the first drift, surfaced and flopped. Dejected because I should have tied some new fly jigs up without sickle hooks. Paid the price.
Soon after, I landed a 13" LMB that went airborne from nearly the same spot. In one of the secondary currents, I let the float drift on the slower of the fast water and it dunked! Yea. Nice fight and a 16" bass to hand.
Slowed after that so I explored the rest of the pool. Experimenting with my longer anchor. This pool can get anywhere from 14-20' deep. Fortunately, I was able to anchor to one side paralleling the upstreams swirl next to a steep bank. Tossed over and the float bobbed, then sunk. Nice little fight and a chunky 9" Goog. Then another fatter one. Then like 4 more and a crappie. Crappie? Uh, oh this could get serious. Over the next 45 minutes, I pulled in a total of 14 white crappie from 7"-11", 9 Rock Bass from 5-9", 1 longear sunfish, 3 smallmouth from 5", 12",15". I thought the crappie and rock bass were fighting pretty hard until that 15"er stole the show.
The spot kind of slowed, so I threw back on the dropoff at the front of the pool, cranked the cast from the fast water to the painfully slower water that I knew had some giant ambush boulders forming a nice Barkmann's corner for piggsies. Float dunked and  didn't want to come up in 6-8' of water. Finally got the fish boatside and it was a fat lard brute. Made up for the early lost fish. Measured 20". Thug at that. 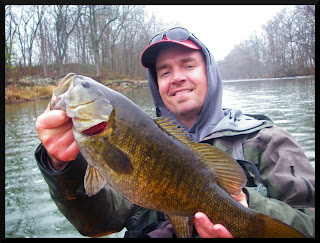 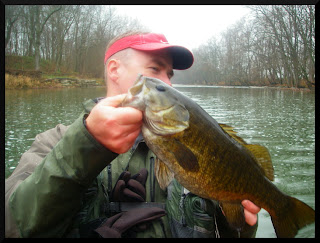 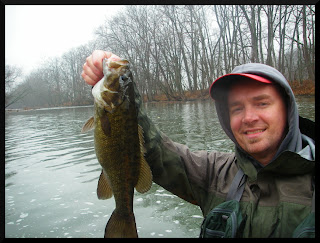