Finally, we had rain rivers and creeks rose and flushed a little.

Took my kayak along to fish now that there is some flow in the streams. I learned from the last time out with Matt, pitching Fnf of high banks was ****. Better to float and have room to cast. Stream was in good shape. 18" visibility, leaves deposited up the banks a couple of feet from the high water mark of this week. It had dropped more than I had hoped, but at least the fish could see!

At the first spot, I just walked up without suiting up. Nothing in the usual places, but lower than I usually fish this high water spot. Surely they weren't out in the pool? Had I missed them? Fished a drift of float and fly further out towards pool middle on the current seam. Float kind of dunked, I set pressure. Something big and immovable. Then gone.

Rats! Felt like it could have been a carp. Tried again a few times in the same area and finally a 16" bass maybe a foot or two closer in. Still maybe 25' from shore. Nice fight. Fish was skinny. Kept at it, it was maybe 15 minutes before the float disappeared just downstream of me and 13' from shore. It was a bigger fish and fought like it/ Finally grabbed her up. Exactly 18": 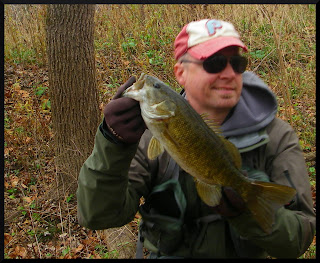 Kept patiently with the spot now that I had found fish. Threw further upstream and the float quickly disappeared. Big and lots of pressure, drag peeling, rod bent in half, fish all over the place. You guessed it. Carp. Big one. Head the size of a large bulldog. Fish finally to hand in a tricky situation. Lipped the grotesque and measured 30" (if rather skinny). It wrestled free so you are spared a carp pic. It had torn the hole to hell, so I didn't bother to cast again.

Drove to my put in and launched the yak. Would be a quick 10 minute kayak ride to the target. On the way I threw to a couple of eddies and picked up two dinks and a 14.5"er.

Finally, got to my 200 yard long by 60 yard wide pool and fished the current seam. Immediate 14"er. Then another the same size. Dink. Chunky 17"er: 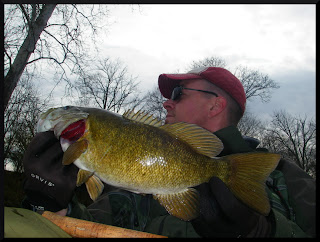 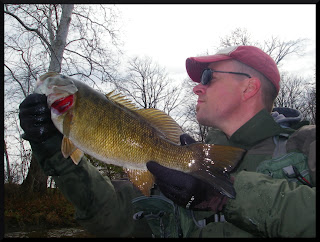 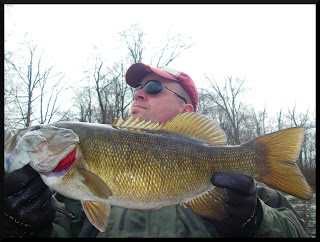 Couldn't find the male part for the larger tripod, so I had to use the small bendable one, so shots are from a low angle.

Bite seemed to die after the last pig, so I moved the yak down the seam, picking up a dink and losing one. Made a bomb cast after a couple dozen drifts back to the original seam. Float disappeared. The fish was big and about 30 yards out. It pulled drag and made for my anchor lines several times. Measured at 20"! 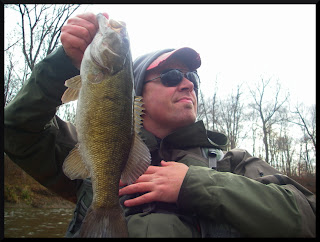 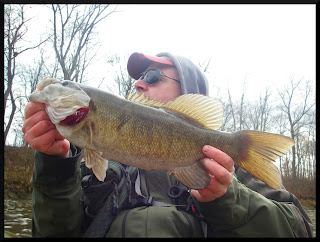 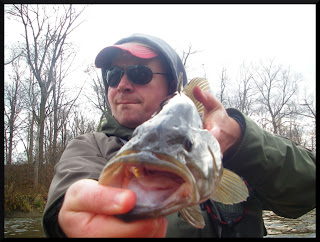 Picked another 12 and 15". Combines were driving close by. Fish seemed to quit after 4, but maybe I got or spooked 'em. Nice to know the pigs missed me as much as I did them.