The algae stain in the water is starting to die off due to our colder temperatures lately. That made this last trip kind of neat. Lots of clear water, I'd never peered down into. Thousands of fish, schools of shad 10-14", quillback carpsuckers, golden redhorse suckers, channel catfish, freshwater drum, northern hogsuckers, huge greater redhorse suckers, carp, even some buffalo fish.

Things started out fast when the rain was falling. Throwing a buzzbait, I hooked up with 7 in the first hour or so including a 16" who shot out from in front of a rock with several friends. A wind began to kick up not long after and leaves were on the surface everywhere. I couldn't walk the dog at all. Flukes were even hard to work. I could basically just burn a waking crankbait under the leaves.

Then, things changed again, wind stopped and the sun came out. Fishing stunk for a while, but the surface began to clear. Fish happened, this 17.5" smb exploded on a Sammy 100. 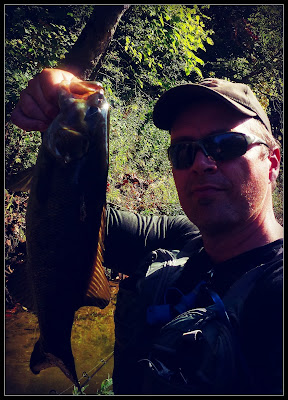 I'll say this, bites were light uptop, so these bass weren't getting hooked really well. I think I lost 10-15 during the fight, including  a couple 15-17"'s. Things really heated up from there and I picked this thug 18.5". The fish exploded in shallow water on the lure. Air felt great on my skin as I tried to tan up a bit. 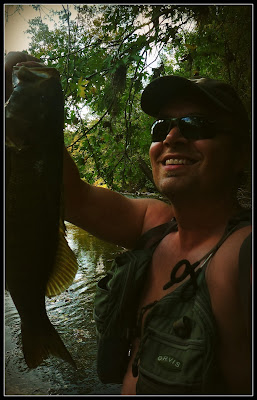