Wool (Mike) and I got out for an all day yak on Saturday on a new stretch. The water was clear, with visibility to 6 feet if the sun was shining. This made fishing difficult. Fish were spooking easily.

In the first 10 minutes, I had a fat 16 and 15, from in front of a riffle with some hefty boulders for cover. Both fell to a Wolkabuzz 1/8oz. 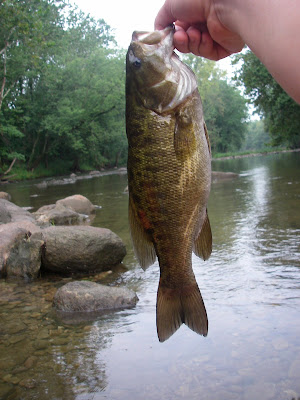 Throughout the day, good fish were holding in choke points where the stream narrowed. Or just off the main current on the deep side of the stream. As the day went on, shade was key. It seemed we had a lot of reaction strikes. I picked up 2 fish and Mike 1 when the lure hit the water. I played around with a jerk bait with visible fish to see they weren't going for easy meals. The tube bite was light all day and pretty non existant. I probably caught as many as I lost on tubes, which was a handful. Nothing big.

Here's a fish just short of 17" that hit a Wolka buzz as soon as it hit the water. This one also had a pronounced hump. 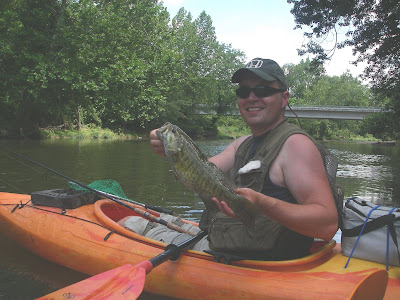 To prevent spooking fish we got out and waded around several riffles and runs. Several fish were caught this way.

Both Mike and I agreed this was the best stretch of stream we had seen in Indiana. There were many rocky riffles to negotiate, with the heat we got pretty sore and exhausted.

Kept up with the buzz when this monster hit! Caught on Wolkabuzz went just shy of 19". 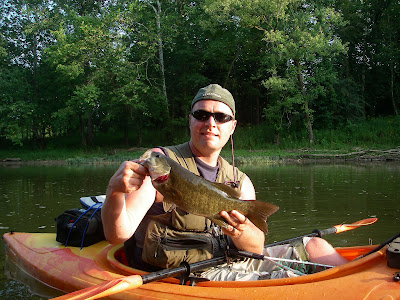 Once again Buzzbaits saved the day, last year I would have had half as many with no size. At times last year I struggled when fish weren't taking a tube. Terrific part of growing as a fisherman, gaining confidence in a new bait. Excellent fisherman who are kind with advice for loudmouth newbies deserve some thanks.

Mike and I worked hard to get these numbers, long day on the water with scant provisions + lots of dragging = aches and pain.

All the fish had awesome coloration and were well fed.
Posted by BT at 11:12 PM