On 8/6 I got on some water with Willie (Pat). New section for both of us. Conditions the same as the previous day.

Started out well as I caught a nice 17"er on a Lucky Craft American Shad Crank. Popped it before I started the retrieve, and the fish nailed it almost instantly. What a fight. The smallie jumped full force into my kayak "Wham". Unfortunately, it was foul hooked in the tissue surrounding the right eye. In the course of the fight the trebles had traveled! 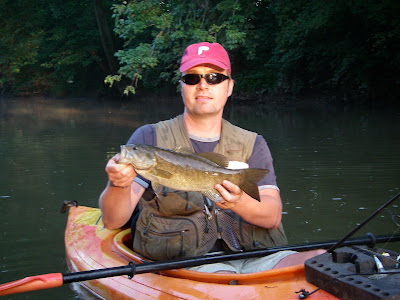 Pat and I were both picking up fish on WolkaBuzz and a tube here and there. When wading I heard a yell from upstream. Since I was the camera man, I had to abandon a sweet hole. A run upstream where I saw Pat wading towards what I thought was a snag. It wasn't a snag. 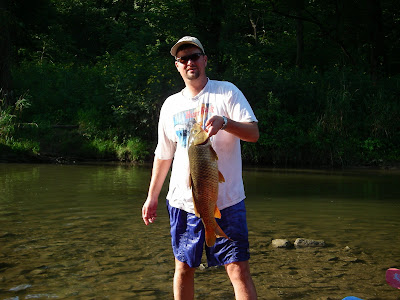 The carp was at least 2 feet long and had peeled drag behind a log where Pat had gone to retrieve it. He thought he had a 7lbs smallie.

The rest of the day we picked up fish here and there on tubes, buzzes, cranks, and spinnerbaits. It turned into a backbreaker, as the last half of the flow was bedrock with shallow water that ment a lot of dragging in the heat.

We both were probably in the mid to upper 20's in numbers, but it was unsatisfying after all the work for 1 good fish.