Last Saturday, Mike got freed up from weekend work at the last second and we scouted several new micro creeks. The first one looked pretty dried up, so we moved on to the second which looked great for one, not big enough for two to fish. We hit the third and it looked fantastic, but small. The creek was filled with nice bedrock with clefts in it we waded downsttream a bit in the crystal clear water and spotted fish piled up in a deeper hole. A dozen smallies 8-14" swam out. We also spotted a nice school of 4-5" shad.

Wading downstream we crunched rock and spooked everything. Fish were stacked more in the slower deeper pools. Finally, we ended up in the Tippecanoe River and on the second or third cast I caught a 17.25" Smallie on a buzzanator. Surprised me from out behind a rock. For a second, we thought about fishing the Tippey because the water had less clarity and the current was blasting. It would help concentrate bass in predictable spots. Decided not to because we really needed kayaks to fish effectively. 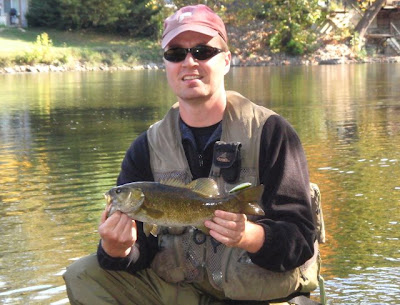 The perspective is really off on that pic, I look huge and the 17.25" SMB looks like a 15"er. Dissapointing pic. Oh well, just a decent fish anyway.

Waded back up the micro flow. It looked really great but turned out to be again too small for two. We got kicked out by land owner that suggested it would be ok if we asked. We were ready to fish something inbetween and knew right where to go. Finally arrived at our destination some time after 2pm. Just above the bridge I spotted hundreds of fish in a deep pool in the ultra clear water. I spooked a 20"+ smb and saw a pod of 15-18" smallies swimming by. No bites. The habitat was incredible pool after riffle pool. We were bugged by coon dogs barking and scurried past several very fishy spots. Mike and I got on some dinks with mini sammies, then switched to Rapala Surface Walk and Super Spook JR. Both had nice ceramic knocking noise that drew strikes. Mostly from dinks, but as the day burned towards twighlight bigger fish started to appear. I had a large fish blow up, then later caught a 16" on the spook after I let it sit. Mike and I found a big wintering hole, and I missed two good fish aggressively popping and dropping a tube bait along a deep rock ledge. We ended up with about 20 fish between us for the day after about 5-6 hours of fishing.

Got out for an afternoon wade on Wednesday. Water was crystal clear as most of the algae has died off. Right off the bat I had dinks swatting at Surface Walk. Hard to believe with the water feeling ice cold. Huge schools of fish were piled up in the deeper holes as it seems they are transitioning to winter mode. Saw smallmouth here and there. Got one about 14" on a long cast with a fluke- ended up being my only bite on this lure.

When I got to another large pool, the wood on the right had leaves collecting at the front. I tested out my new favorite toy, a Rick Clunn Lucky Craft Jointed Wake crank in shad pattern. Dragging it under the leaves at speed, it got mashed and missed. The second cast got mashed again by a 14" fish that was followed back to me by another a similair size. The fish watched me unhook his friend, drop the lure back in the water, then made a play for the bait until he realized I was alive and sped off :D . I wasted the next ten casts or so in there as some of the leaves were partially submerged and I could not get the bait under them. Finally I got one under and two large fish 16-18" followed it out of the scruffy limbed laydowns. There wasn't more than 18" of water over there. A few casts later a huge bass tried to nip in the feather of the bait, saw me then sped off upstream.
The leaves were too plentiful too accurately run the lure, but when it was free, it got chased and hit by several Smallies. I hit 5 more on the lure up a creek branch. It seemed like the smaller fish were keying in on that wagging, wobbling feather. I'd pick up a fish here and there. Once again the after 5pm bite was key. I hit a bend in shade with a popped and dropped tube and picked up a 16.5 and a dink. I started picking fish off wood dragging the wakecrank over like a buzzbait they seemed to key on the wake and wobble. Saw bass streaking all over the place to hit it, a 15, 15, 14, 12, 16 in short period of time.

The 16" hooked the number 5 treble right through my left thumb, in the meat, burried to the bend. Fish still hooked on the other treble. Ouch. Wasted about a half hour of prime bite figuring out what to do after the fish was off and released. Finally poked it through the front of my thumb and cut off the hook below the barb, backed it out. Put a new treble on and started catching fish again. 12, 13, 15 on the way back.

Ended up with 28 Smallmouth total, lots in the 12-16" range.Very surprised by how aggressive they were!