Fishing this weekend had some hot action, but topwater bite was still spotty to non- existent.

Got started Saturday the 5th, AM at daybreak. Fish were slapping hard at buzzbaits and missing entirely. 1 out of 8 with a lost 14"er. Went to the Splashtail 90 for a similar effect with better hook up ratio. Got bit less. They wanted loud and clackity. Finally hit a good deep bend and pulled 3 nice fish including this 18"er that destroyed the 1/8 oz buzzbait. 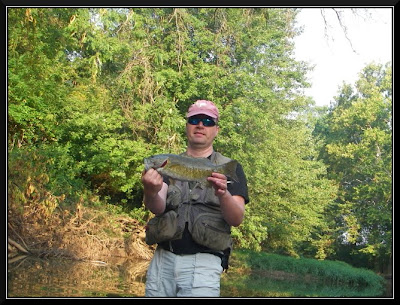 I left as the rain came in. Plan B was a small river I fished 25 miles of back in 2007, with pretty good results. I arrived to cool and very clear water, Visibility to 4'. There were actually a few holes that might have been that deep. 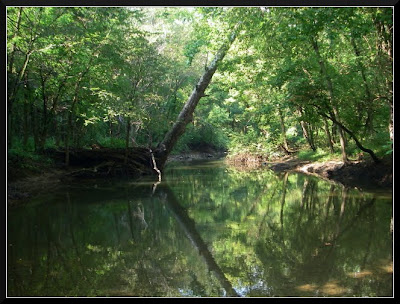 Baby fluke bite was on. I tried with the texposed rig, but they just wouldn't hook up on the G-lock. Went to the nose hook and started slaying. Lots of dinks, but some very nice chunk 14"'ers here and there. Anything with a little depth held fish. The bass were everywhere. Sycamores produced 4 or 5 fish. The rain poured, I got soaked, and slew, and laughed. I got some bigger fish hopping a tube, with 3 16"'s being the largest. The constant action was the joy. Resolve to catch fish after fish kept me going despite cold pouring rain. Rip it to get their attention, let the fluke sink to get bit.

Here was a very brown 14" smallie that was too cool so I had to snap a pic of him: 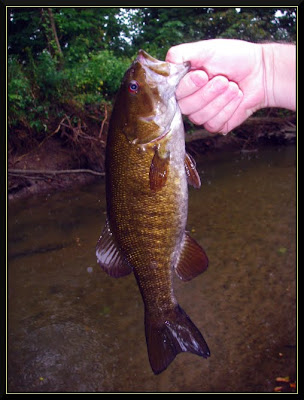 Stan landed his first fish. We caught one here or there flossing boulders, when a train of ATV's and jeeps that had muddied up our water came into view. The best part of the wade was foiled . They looked pretty nervous about what they had done. Been seeing a lot of tracks on the creek beds lately across the state.

We got above and actually caught some fish 15 minutes upstream of the mud flow. Stan caught a nice 15 on the fly and a goog. I caught a couple dinks. We hit a pool where fish swam the circuit. I could basically keep casting to the same spot, catch a fish, cast back to a new fish in its place- all 12-15". Above the riffle Stan lost a headshaking "fish of the day".

As we moved away from the path of the ATV's the fishing got better as the sun went away. What did we expect on Labor Day?

I got a 16.5" then this 17" (put on a show). Fishing was easy. Not sure Stan was stripping his streamer/wooly bugger fast enough to get bit. The quick erratic rip seemed to turn fish aggressive. 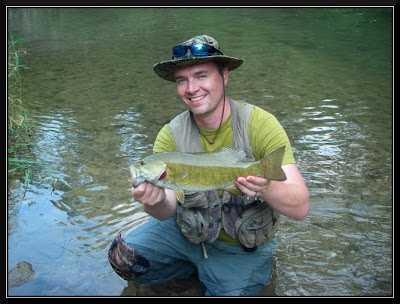 At the first, I waded downstream, while he got ready at the truck. I hit this 17"+ smb dragging a tube upstream, then a 15" on the next cast. The stream was pretty small and pretty dry, but shows a lot of promise. I spotted a 30"+ flathead on the prowl in the same small pool. Mike caught a nice 14", but there was simply too little room to maneuver and be stealthy with two people. After an hour or two we headed out. 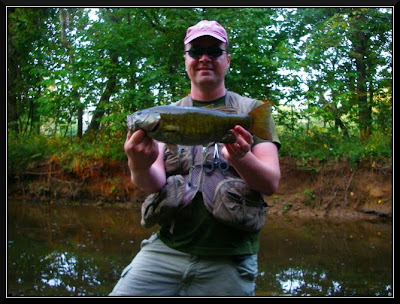 We stopped at Deer Creek by Greencastle, as from the bridge we saw visible riffles. At first, it looked very promising. Certainly the cliff walls were beautiful. Mike nailed another smallie on a tube in the one deep pool we found. As we walked upstream it was apparent this creek once had great habitat. It was now filled in by sod and silt form nearby farms. Simply disgusting. Hardly any flow to it. We walked far looking for another hole but it was all flat without any depth and filled with silt meters deep.

We scouted another small stream that proved interesting indeed. Again we had to walk way too far for fish, but when we did get to some holes, they were filled with smallies and some spotted bass as well. All the action was hopping or dragging tubes, although I did nail the largest fish on a Splashtail propbait on the power walk back to the car. Fished about a total of 5 hours with lots of driving and lots of walking. Some good basis for future trips with the first and last streams.