Smallie fry- this stream is legendary for slow/low flow. So these fish are ahead of the curve. Much of the wade was a trickle.


Highlights were the laughter. Mike, Nate, and BT banter is not to be missed. Worth being pinched and bumped on a small stream by two other guys with that dialouge. 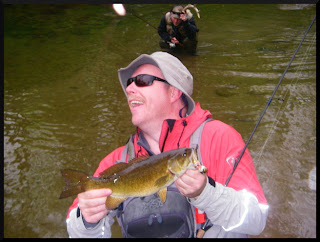 21 gun salute refers to the rapid plopping off of large crank baits in rapid sucession at a single small target from a bunch of dudes lined up side by side in a small area. It was like watching gun fire impact. VOOM! POP! BOOM! KERSPLASH! KRACK! 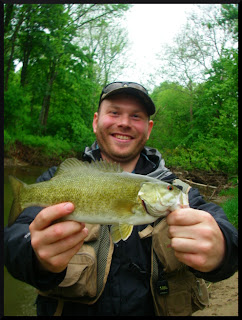 Nate's current rod is a rocket launcher. Kind of. Sounds like a rocket launcher, though the results be less impressive. He won 'Tree Boy" gold medal. Couple that baby with a 2:1 gear ratio spinning reel. The reel seemed to bring in about 12" of line per crank. The smallies got bored and just hung out after a while. [romance]All that is ok because his ear to ear smile was eternally stretched for nocturnal carnal reasons[/romance]. Also, I have yet to fish with Nate without Nate swimming. He apparently walked the last two miles with an extra couple gallons of water aboard.

Mike may need to drink less coffee. Just saying. For the first .5 miles he set a blistering pace. 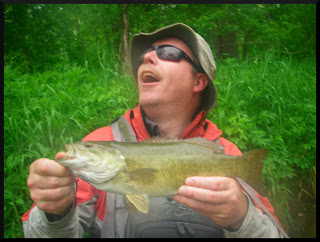 Hey, neat: MC walked on the bank while I walked along it. Spotted a couple old beds. Then a slight undercut in 1.5' of water in the middle of long expanses of bedrock. A 15-16"er and then a larger 18" ish smallmouth shot from under that smallest of undercut and spooked off. Beds, fry, beds, fry, fry, fry. New fry, less than a week hatched.

Hey, neat II: We spotted some fish in a deeper pool inbetween like a mile of bedrock on each side. The fishes seemed to spot us so the other guys moved on. I was still working the RC LC 1.5 in chart. There was a nice fish hanging just off the current. I plopped the RC down, swung it upstream, let it float up and drift downstream, Bass took notice. Then like I've tried to explain before, I cat and moused him into striking. It was awesome to see that nice smallie take notice of the repeated diving, wobbling the drifting up. Then it struck. and I saw it all from less than 25' away.. Very cool. Still can play the movie in my head. The 17"er above. 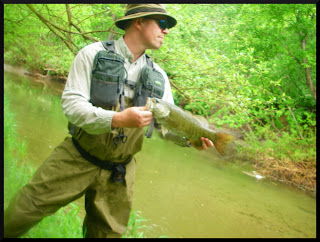 Hey, Cool: Mike catches a fish on a crank, while he's fighting it I throw in and grab the follower on my crankbait. Nate sees this and throws in and catches a third as we've landed ours. How about some Gold points for all of us? Maybe +5? Yeah or nay?

Hey, Cool II: Nate is given a confluence to fish as he is lagging behind early in fish count (we were calling him sucker due to catching one in the mouth with his crankbait). At the confluence, Nate gets a nice 14"er or so. Mike and I come up to look at him. After a few casts, I get thumped by the largest fish I've caught out of this stream. Small, small pool. The 18" spawned out female above. Complete with black parasites. 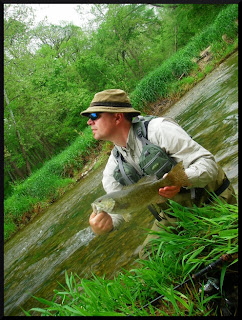 
Smallie fry and abandoned nests everywhere. Flow was low and slow
Posted by BT at 11:53 AM