Ridiculous August 2013 for Smallmouth in Indiana

This Saturday, I got to the water about 10 am with thunderstorms in the forecast. I was pretty excited about this because we have had very little rain. Seems like fish have been on it by 10 if there was shade. I picked an all new stretch of river to try. Visibility was close to 2', decent flow.
Started out throwing a Jackal Ashka 60 Crankbait. Crank it down and bring it in slowly, thunk!
This bait just doesn't want to hang up on anything. Brought it through and over wood all day.
Got a 16"er relatively deep early, made for a good sign. Fish were never very far from choke points, riffles, and shade. Bring a bass back to hand off cover and there would be 2-4 more trying to steal the bait. Could not get bit on finesse. These smallies are eating shad.
On the shallower flats, I'd throw the Lucky Craft Kelly J jr. A small 1/4oz propbait. It cleans up on dinks, but I did manage a 16" early on it.
I was starting to pile up the numbers and nice medium sized smallmouth. I spied a downed tree in heavy shade to my left. The new confidence in the Ashka, I made a 25 yard cast across several submerged limbs. Shortly after landing I saw  a big bass snarf it up. Hadn't planned for this. Kept the rod high and got him over the logs. Fought the bass left and right. Just a bulldogger.
Thick fish just past 18": 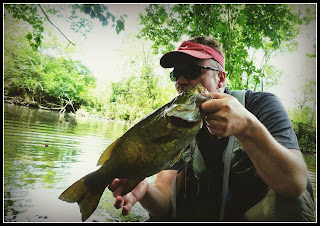 Continued to be a good day. I had one problem. I was on an open ended wade. There wasn't another bridge on up to the next town some 7 miles or so away, so no hidden bike trick. At some point, I'd have to turn back. It started to T-storm and I figured I'd hit all the wood from short range, making 10-15' casts with a chatterbait, then dragging it quickly past the front of rootwads. The rain had me totally covered and I imagine was distracting for Mr.Smallmouth. Man, it was the ticket. Scored several more thick bass in the 15-16" range this way.
Ended the day with 43 SMB (18.25", 6-16", 3-15") 3 Rock Bass in about 8 hours.
Hell of an August 2013! 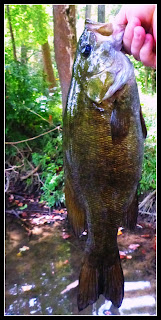 Thanks to the Camp and Fish I fished 8 times in August 2013. In those 64.5 hours, I landed 369 smallmouth bass and 19 'other' fish. A rate of 5.72 bass per hour or 6.02 fish landed per hour. Pretty sick for river fishing with more than a handful of outings. Size was great too.  42 over 16", 16 over 18". Never come close to 16 smallmouth over 18" in one month before!
I tied my 18"er on each trip record at 6 outings and have hit at least one 18"+ bass in 9 of the last 10 outings.
How/Why? Part I would attribute to my work out plan working- with medicine ball, squats and 130 daily push ups. It has really helped. Other keys are stretching, staying hydrated, and energized.
Teeva water shoes are working great, so no heavy boots. Nice to find a middle water column presentation in the summer that works that isn't a overly riggy fluke. Tossing the crankbait the last four outings has truly bulked up the numbers.