Tried out a new stretch of an old fav. Stream was actually wider than I'd expected. Took awhile to find a put in spot. Finally found a medieval bridge and parked.

Walked down about a mile, mile and a half then started fishing. It didn't looks so good. Silty, no current, and plenty of wood. But then an odd thing happened, I stopped pouting and started fishing.

I was throwing an 1/8 OZ tube Hooked up brand Sweet potato . In 20 minutes, I caught 7 bass (15.5") and a goog on tubes, then poppers from a hole near a root wad at a bend in the stream- the bend was near a trickle of water.

Moving up, I picked up a few fish on Poppers worked slow (shade) and a couple on tubes. Nothing big, but 4 fish from 15.5-16. Caught my last fish on Splashtail 90. I managed 12 Smallmouth and a goog. Saw plenty signs of bucket peeps so it was time to move out after about 3.5 hours. Got back to the car and decided to hit another stretch while waiting for the prestorm binge.

Got to the second stretch about 4pm. There was plenty of limestone/shale flats with steps for holes the water temp was a balmy 86F! I headed this way because the gradient would produce more flow and hopefully, activity. I was going to work the backs of pools heavy with the Splashtail- hoping for a high hookup percentage out of the lure.

It's pretty much what happened. I caught another 25 Smallmouth and 1 goog. 4 smallies on Tubes. 21 on the Splashtail. The stream had almost no wood so this was the perfect surface lure. Ripping it, popping it, and pausing it led to a very high hook up percent maybe 80% or so.

This fish, like most, came off pushwater at the tail end of pools, it was a competition strike, and the fish hit the lure right before I snatched it up. 17.25" 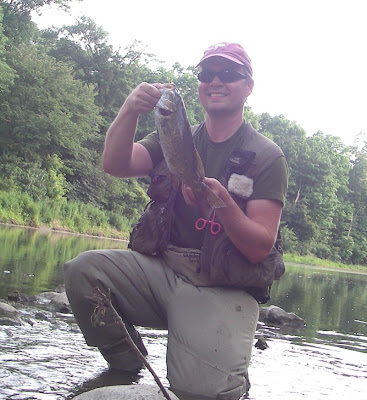 I did get two fat 17"+ers on a tube. The first, was caught near a downed tree and rootwad, right next to some current and the eddy created had foam on it. The fifth cast or so, the fish struck. It had picked the tube up while I dead sticked it. It went 17.25" and was fat. 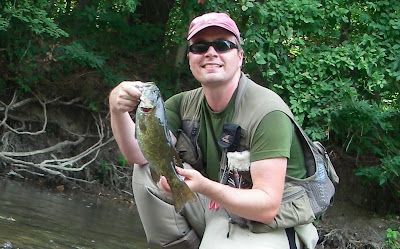 The last good fish was after the topwater bite died around 7:15. It was near rootwads and current with a log leaning in from the bank. When I pitched the tube in the right spot he took it. Another fat fish, this one went 17.5". You can see the spot my tube hit to the left behind my right shoulder where the log slants into the stream- a foot in front of that right up near the bank, 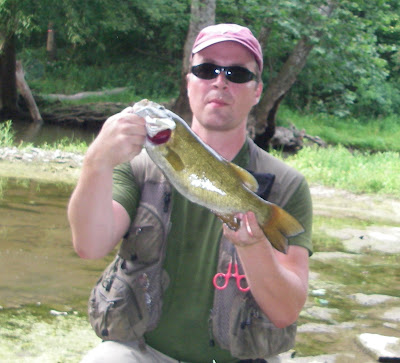 Storm started rolling up, I caught two more on SPT90, one had a madtom sticking out of it's gullet backwards.

When I started the long and soon to be wet walk back to the car, a guy pulled up and offered me a ride. Heck yeah! Rain started falling like cats and dogs.

He's the town family doctor. We both could swear we'd met before. When he said he kayaked I thought I might have seen him on the water or at the Expo. Thanks, Chris!