Fish in the Rootwads Beckoned Forth

Riff-Raff and I got out for a wade. We decided to do an entirely new stretch.

Riff caught two on Chatterbait and I caught two googs for like the first four hours. We hit a log jam where I had a big fish pick up my tube and run with it, but alas, it came free in the root wad. Then I fell into a 4 foot deep pool of algae. Nice! We walked and walked. Until midday the stream seemed empty. Very few strikes.

I caught a fish on a Jimmy, then another on a tube. It seemed like the bite picked up when the sun got in the sky.

Wasn't shaping up to be my day. Jim had an encounter with a big fish that smashed his popper- but it got quick released too. I caught 2 more fish on Jimmy and backlashed, while I untangled it, Jim moved ahead and caught a 17"er on a popper! I was behind him and hit a spot he passed for 5 Smallies 13-15" on a popper worked slow near root wads. Fast moving or loud topwaters did not work.

We moved up a narrow stream area near more root wads, I caught 2 fish on Popper , and had a 16"ish fish throw the lure on the jump! UGH. 3-4th encounter with sizeable fish with nothing to show for it. What was strange was the fish that had hit came near rootwads often, but the water was often knee deep. Only a slow deliberate popper close to the wads drew strikes. I theorized the fish were coming out of undercut rootwads to strike the Popper. Seemed to be the pattern for the day.

We hit some sort of ancient bridge, I lost a fish on jump, then caught a 17"er on a tube while Jim was snagged up.

Jim caught one on the chatter and we split up. I caught another fish on popper then 3 more on a tube at an 's' bend with quick current and good depth.

Met up with Jim to fish a log jam, when he stayed behind to fish it more thouroughly. Moved up to the top of the pool and tossed the Jimmy to where it widened and brought it's dog walk close to more rootwad. A dink missed the Jimmy followed by four more strikes, I didn't panic and kept on walking the dog under fire. Paused the bait, then started again when a pig smashed it! When I landed the fish, it went 18.5" ! and was fat. The first strike was NOT from that fish, since riff caught a couple there after, I think the pig came in to finish it! 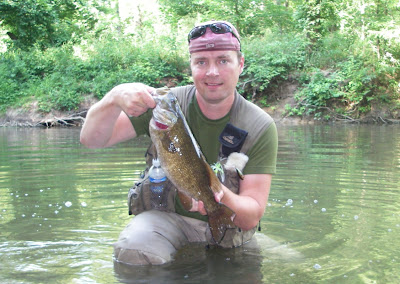 We fished on for a while, Jim caught a couple more on Chatters. Then we walked back to the car after debate as to direction to take. Total trip was 6.7 miles 11 hours. Beer!