Mike C and I went for some smallmouth this Saturday on a small-medium sized river. The river was stained with initial visibility a chalky brown 14"-18". Turned out to be a really nice day, not too hot, not too cool. Just about right. Water was cool at first from colder nights we have been having.

I got a 14" bass and goggle eye on a black 4" tube early on. Mike caught two on a spinnerbait. All the bass were near likely spawning areas early...still. We worked slow up a wide, deep pool, throwing tubes, letting the lure tumble in the current and the nicking bottom continuously. I caught two more smallmouth, one was a pregnant 10.5" smallmouth that looked ridiculous.

We neared the top of the pool, a right angle bend, the deep side was lined with rip rap. I was casting quartering upstream and letting the bait tumble in the strike zone as long as possible, imparting little action. My rod loaded, several powerful runs and a crazed smallie that stayed deep so much we thought it was a catfish. Was a bit alarming to have this beserk fish running circles powerfully around me in belly deep water. Finally got the first plus fish to hand of the day (17.5)It had some fin damage: 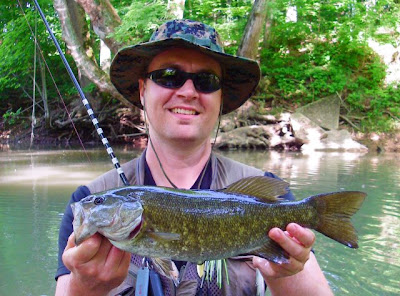 We worked carefully to the top of the bend where the river split into three forks. All three forks came back together again about 65 yards upstream. As we fished up, Mike caught another on a spinnerbait. I added three more smallies on a 4" tube. One went nearly 15".

At the top of the three forks upstream, was a logjam island that had been covered over in silt and more logs forming an grassy island. I threw straight upstream 40' on my first cast. The tube was quickly picked up by a thick, powerful, brown smallmouth that made a run for the underneath of the island we were standing on. Turned it away at the last second, stopped two more runs then hosited her up. The fish was a beautiful brown copper. Not a common pattern seen around these parts. Unfortunatly, the picture shows a yellow smallmouth. It must have color changed in the minute or so it took to photo. It also went 17.5". Fully pregnant, stuffed. 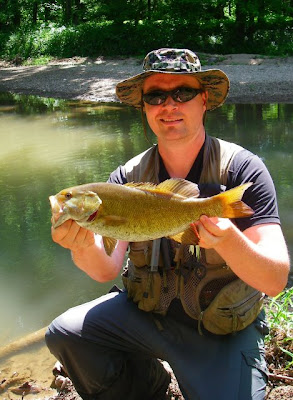 I picked up another 14"er on a tube at the front of a second logjam. We moved upstream through some wide shallow pools. The irrgaition ditches nearby had obvioously been dumping fertilizer in the stream because downstream from these the snot grass and algae clumps were pretty bad.

We spent a long while walking past wide pools. Mike got discouraged. He didn't want to throw a tube. Many times he gets in chuck and duck mode and makes too few casts to a spot, then assumes fish aren't there.

I caught 4 more on tubes and another goog. We finally arrived at the best part of the wade.

You can see a nasty fast choke point behind Mike and his fish in this picture: 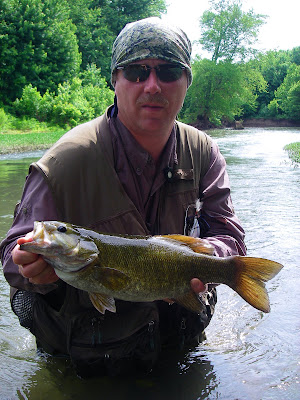 We were fishing just above the riffle where a water willow island served as a current break above it and to the left. Mike had been reluctantly throwing the tube jig near the current. After about his fourth or fifth cast, he popped the tube off a rock. When he reeled in his slack, there was a powerful fish on the end of his line! His rod bent double and the fish swam fast in the current right towards the shute behind him. It came full out of the water, then we knew it was large. He turned it just before it got into the super fast water, trapping it on its side in some semi submerged willows. Awesome fish.

Nearly perfect in every way. 18.5" Chunk 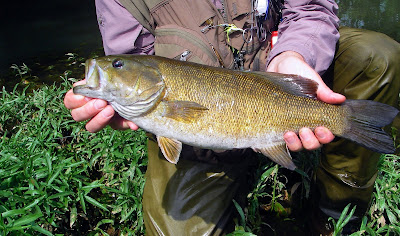 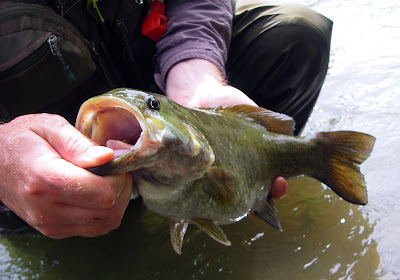 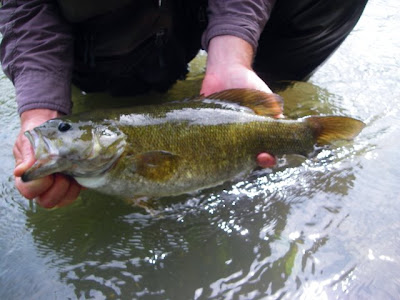 That pretty much made his day at that point. But a funny thing happened. Mike started concentrating and whipping the tube in close, skipping it under brush and logs. Fearless like you need to be. Working the bait slower, keeping it in the zone longer. He nailed another fish shortly upstream to about 14-15". We worked some clay bank for a couple more tube fish. Mike was making multiple casts to each good spot and not giving up on the good spots until a fish bit.

To cap it off, he pulled this nice 16.5" smallie from the other side of a laydown next to deep water and fast current. In between the laydown and the other bank. The only thing to do was force the fish up and into the air. It was sweet, the bass hopped the log and Mike was in the clear. 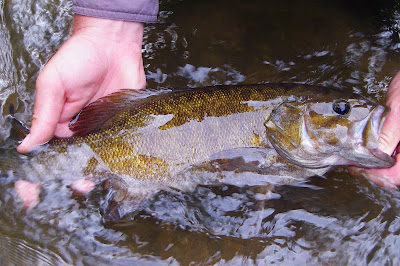 Many times in Indiana, the jig/tube bite is the effective tactic regardless of what we want to throw. By believing fish are there and imposing your will on them to bite via repeated presentations on the bottom. Keeping the bait down in the strike zone catches more bass. Patience and persistance wins. Tubes are darn fun to cast skip, hop, drop, and pitch. You can be really accurate with them, cast them a long way control, and the entry noise easily. It was good to see MC really pick up on this at the end of the day.