Mike and I floated a 9 mile stretch of creek on Sunday. Water was dirty with visibility 8". Water was up. Bites came when anchored and tube was fished slow parallel to current seems. Don't anchor, didn't get bit as the lure moved too fast.

I caught a few on crankbaits, Mike got one 16.25" on a spinnerbait.

One of the worst days fishing I've had in a long time. Call it kayak rust or being worn out from the sun and yakking. I pulled the tube from two nice + bass without ever hooking them, then looked to see it was texposed too tight to expose the hook. The second felt like a monster.

I found some clear water running down from a feeder creek. The 3' of slack water along the bank the creek came in from was running clear. I tossed a black tube under a bush at that clear water and got bit. I fought a 17" or so on a couple runs in current, the fish surfaced then was gone. Tube flopped out of his mouth. Didn't help the yak was drifting downstream in full current. I anchored and threw back under the bush. Thunk. Brought a 12-13" SMB to hand which quickly flopped off the hook. (fish were head shaking like crazy) Next cast, lose another 12" on a jump. A few casts later, I hook a pig who gets in current, then rubs off my tube in my anchor line. I then whiff the next two strikes.

Bad day. I haven't been worn out like that by fishing in a long time.

I will say I was surprised how active the fish were in the muddy water. Fish were jumping and hitting the surface all day. If water had been clear, we would have killed them. As is, we did pretty well for the lack of visibility and all the fish I lost. I'll just take my lumps wonder what could have been come back stronger next time having learned something.

Mike went on a good run at the end and ended up with 10 SMB.

Next few days could see a post spawn explosion if water clears up and rain holds off. Rainy season is almost at an end. Hope the fry survive.

Only a couple weeks from examining my 6 month Indiana 2009 smallmouth bass fishing stats. 2009 has been great for plus sized smallmouth bass, but not for numbers. See what I can do about posting an example log. 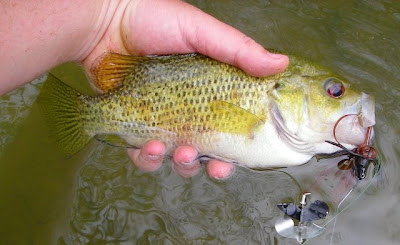