Batmobile was in the shop, so clusterfrick was out, Bhugh did all the driving. We arrived at the NCS around 7:15am. The water was cool, but clear to 2+', a nice green color.We started out on a new stretch I had never fished of a favorite northern sidewinder.

We marched past marginal water, mission to prop up the rookie's confidence. I told him a story about the fish turning on when the water warmed a degree or two. Pattern 1: No pattern- cold overnight temps not great for AM fishing.

We waded quickly through a long silted pool when it riffled up with a riprap bank on right hand side. I banged out 3 consecutive smallies: dink to 12" range, losing a fourth. Bret came over and snarfed up number 5 from near the riprap. We worked our way forward quartering casts from the rirap bouncing downstream. I bomb casted a tube at an inside rainbow arcing current seam. I got hit pretty good and knew a good fish was on. Then it was gone . As I reeled in my slack, it had not left but shot downstream rapidly. I was in for a crazy fight afterwards. I can honestly say that fish was one of the better fighting smallmouth I have ever faced. It didn't come up and I thought it was a carp. It measured 18". I went and walked where the fish had hit on a seemingly featureless current seam. Two half buried boulders had served her ambush point. 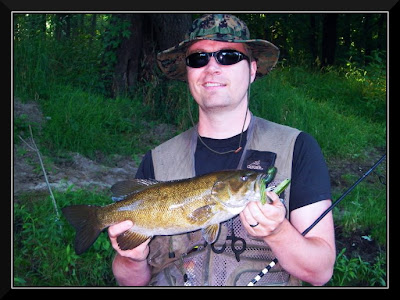 We moved on and for about 2 hours caught fish on tubes. I managed a 14, 16, 12, and a 16.5 on tubes tumbled in current fast and slow. Brett caught some dinks on his 3" tube and a fish on a Wolkabuzz. I managed 2 splashdown fish on Mr.Ploppy (LC RC 1.5 Wakecrank). It's quickly becoming famous for getting slammed shortly after impact. It lands without a hard thunk. The jointed tail feather wavering in the current. It didn't get bit once when I moved it. The largest was this 19" spawned out smallmouth. The fish annihilated the bait in a deep gap behind some water willows. Almost instantly. 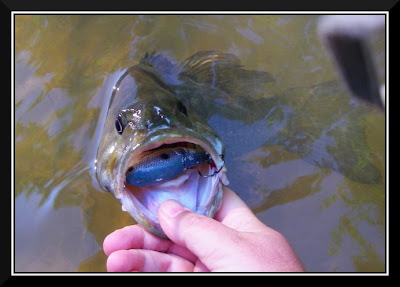 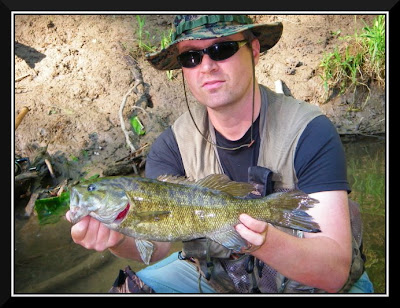 Then the sun came out. Picture a balloon deflating. That was our fortune for a couple hours, when cloud cover moved in and smallies went nuts. I discovered ripping a tube was getting hit by pulling the tube out of a 17-18" bass nearly at my feet. Pattern 3:rip something fast. Tubes, grubs, and then buzzbaits. We went on a pretty sweet run of dink fish after fish for two hours when...

The sun emerged from the clouds! Slowed wayyy down.

Brings us to Pattern 4: Clouds came back and brought on the stink. We caught like one or two small fish. On the way back, I did have a monster hit the Kelly J, pull drag, then disappear.

About 8 hours of wading in the neighborhood of 4 miles.
Posted by BT at 9:30 PM