Why do I bring so much stuff? I hate to not have the one bait the fish are biting with me. Got out Saturday AM to a fine mist of rain. It lightened up midday, but the sun was there to warm rather than drive fish into hiding.

Got a 13" and 16"er on a white spinnerbait in front of and behind the first riffle. The last bites of the day on the spinnerbait.

I hit this 17.75" smallmouth on a tube on the inside current seam (nice winter hole) across from this riprap (produced nothing). I caught an 18"er there last time through with Bhugh. This time I planned on doing the whole wade from the bridge below the famous Santa Claus to the railroad and walk back. 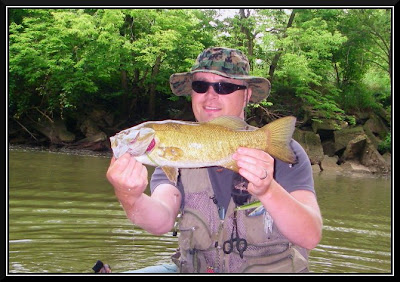 The tube bite was sporadic and unpredictable. There was zero topwater bite. I needed a search bait to cover water. I threw on a 4" green pumpkin/red flake grub (darterhead). The grub started producing fish in places where I'd thought they would be, but weren't to my other baits. What's more the bass were all decent fish all day- hardly a dink all day. I still doubted whether anything epic would happen. Then it did. 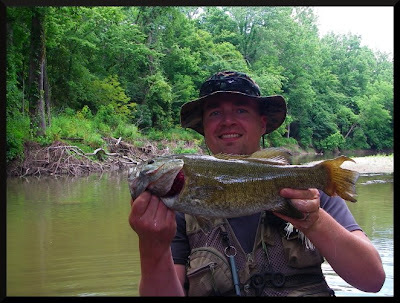 The bait I always thought was a dink magnet got slammed parallel to the lay downs behind me. I knew it was large. It kept going through my head that I had a size 1 hook on that jig and how lots of fish seemed to find their way off when fishing LMB in a local creek a month ago. To keep the fish out of the wood and keep it from jumping, I horsed it with rod tip down. Beached the beast. Would have probably been 20" #10 of the year if it had a normal tail. Arthritis of the tail. 19.5". 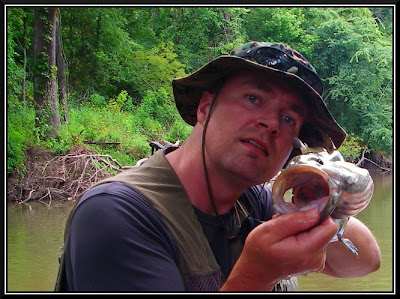 Continued catching nice 12-15" smallies when it dawned on me I had dropped my grub bag somewhere. I was down to the last jig and last grub. The bite was sick. The hook broke while removing from a fish. Oooff. The bass were biting other lures, but the grub was catching the same quality at about 5-1. Worse, I was about to hit the best part of the wade. It was around dinner time. I finally got some fish to attack the Techno Minnow 2000. This resulted in 2 dinks and a 17"er. I still had almost a mile of prime water to go. Tired and dejected from running out of ammo. I power walked back to the car.

Could have been a 50 fish day, but not bad at all.

On the walk back, I was yelled at by a weirdo, then invited to party by two different groups of locals. Did you know 17"+ SMB can be caught on live crickets?