Wolkabuzz and I got on the Tippecanoe River this morning by 8:30am. It looked a little swift; we figured it would just push the bass close to shore. Visibility was 18" to start, worsening as the day went on and water was released from the dam.

[Bighead carp alert]Throughout the day, I would crank bandit footloose fast through seams and slower water. About 10-15 times, massive fish caused boils and kerplunks near the lure, one would think could only be caused by 20-30 lbs fish, it happened far too much to be Muskie or Pike. I doubt they are afraid of 2" crankbait anyway. Those things are spooky on overcast, drizzle, lower vis, high water near riffles .[/Bighead carp alert]

Ok, it wasn't long before Terry lost a nice midriver fish when it went airborne to spit his spinnerbait. He then picked up the first fish on a spinnerb or crankbait.

I was working the Bandit Footloose in citrus shad crankbait angle, as we would be covering a lot of water. Since there was a lot of wood this one foot or less diver should stay unsnagged, I would rely on a stop and go speed cadence fleeing the bait from whatever small eddies we could find out towards the current. The current carried our yaks to almost a one and done. I couldn't help but try and hug the banks in my yak and make short wrist flips, followed by quick stop and go. It was fun to keep hitting targets and keep the bait in the water as the yak floated along. Thus, the first smallie for me came out of some wood and smacked the Footloose a full 18" from my kayak, then wrapped line around my rod tip. Luckily, the fish wrapped itself, so I was able to scoop it up. Somewhere around 15"-16" and a chunk. Not long later, I got three more, dink, dink, 12"er using the same technique. Terry picked up a couple more. Worked really hard, but couldn't get a strike again for like an hour as vis decreased. Another dink on a shallow crank.

At noon, we decided to paddle out and hit a creek. A resident told us the takeout was only a 15 minute paddle away. Famous last words. We paddled for a while and saw some better water rock jetties and piers from the bank creating current seams and partial riffles in some areas.

I fished a smallie near to hand about 13". When I got to the last jetty, everything lined up perfectly. My boat was 15' from the current seam parallel to shore. The 25' backhand wrist flip landed where I wanted it. Softly, but quickly ripped the footloose down and towards the seam. I knew something was going to happen. It did. BUNK! Big fish! Of course, the boat was going one hundred miles an hour; at least Mr. Smallmouth stayed in the slow water. It tried going downstream in the slack powerfully, bending rod, tugging kayak....

OH WOW. *Drop your anchor* A voice said. I held the rod high to keep tight line if the fish jumped and stop the head down runs; my reel hand slipped down and unloosed the anchor rope from the cam cleat. ZZZZVVVIIIP. Gadunk, dunk. I saw a big head point straight towards the heavens. Seemed to aim for eternity. *Getting ready to jump you sod!* said the voice. Rod up higher to keep the hook tight, tight in the direction same the hook entered open mouth. Reel hand back to home base, turn the fish.


OH NO, NOT A HEADSHAKE!!! *Line tight, idiot!* Voice throttled. HERE COMES ANOTHER ONE. HASHAKKASHAKKA-SPLOOSH. How to land the fish? Lean to the right (secondary stability), surf bass onto the side of the 45 degree tilted kayak switch rod hands and scoop that B up quick style........ 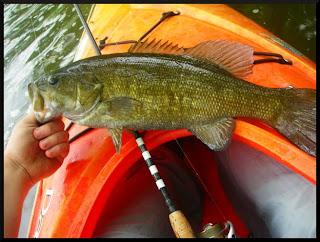 The bass had a huge tail and was long. It measured a clean 20". Terry had been paddling. He was nowhere in sight. We were paddling out. But... there...are.... another fish hops on. Wolka gone. This isn't 15 minutes, it's half the float. Pooh. 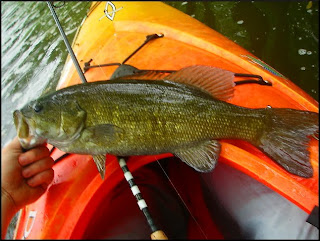 Phase two: Creek Zed. The first couple casts, I look up to see a nice smallmouth around 16" fly off Terry's hook at his feet. Terry gets revenge crankbaiting a couple fish from under and in front of a bridge. The larger 17-18" has a long white tube hanging out its rear. Egg dispenser or smallmouth poop. We went home after 20-30 minutes of creek. 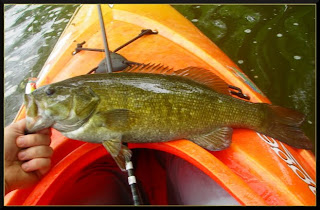 Long day with maybe 4.5 hours of fishing, mostly driving and then paddling out.
Posted by BT at 12:02 PM