My target flow, a central eastern Indiana creek was still was up and had too much stain when I arrived early Saturday morning. As sunlight shined through the tree leaves, I knew effort would be more productive in clearer waters. Drove to the other side of the state and got it some skinny water  around 10-10:30am. Totally new stretch of creek. Went upstream to start. Things looked good habitatwise. I just had to walk up on some cover or good hole and test it out. Far downstream I knew it held smallmouth from a previous trip. Water was clear all the way down.

Plenty of canopy from hill and tree. I think this is key for a shallow stream to hold good bass. Shade to hide in and keep the water temps cooler. Unfortunately, man has removed much of the shade and tree cover along Indiana streams. It can be really hit and miss.

Saw a couple Rock bass goggling about at the bridge. Shallow. A long walk until I found any depth. I really should have turned around, but the substrate was interesting combo of round rock, gravel, and wood. Kept going, spotting a couple empty beds. 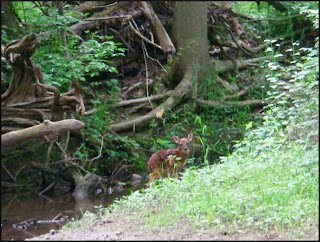 Finally, I found a deepish hole (for this creek) formed under a stack of wood debris. Threw a tube in. Line moved. Nice 15"er. Promising. More beds. No visible smallmouth fry, plenty of tadpoles.A small snapping turtle was lined up at that buffet.

Couldn't find any pattern- didn't see many fish or minnows, which was concerning. I came to an electric fence across the creek. Went around, it looked good up ahead. However, hoof prints, cowpies and stink, changed my mind. Turned around to go back and hopped the electric fence. My pants must have brushed it, as I felt a jolt. Oops.

When I got back to the bridge, downstream looked better. Boy, was it. I kept going and going. Riffle pool after riffle pool. Shallow, but plenty of canopy and rock to hide in. I spooked several nice bass in shallow water. Tried to not kick up too much silt wading downstream. Didn't work really well, so I got out and walked around holes and fished upstream.

Soon a chunky 16.75" snarfed the 3" R2C swimbait. It was covered in black spot parasites. This would be the theme of the day. Lots of bass, all with the black spots everywhere. I fished the stream before and it was don't uncommon closer to the main flow. The smallmouth has the body of an 18", the tail of a 14". :? Someone sprinkled black pepper all over it. 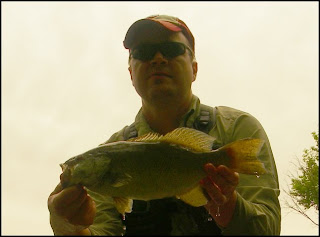 There were only 5 or 6 deep holes in the entire stretch which I measured out at 4.4 miles. True to form, each produced 5-6 smallmouth and rock bass. Here's a pic of one looking upstream: 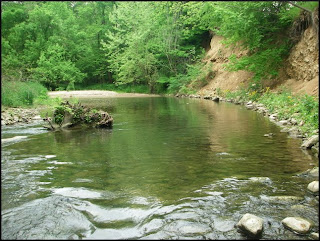 There was often quite a distance between deep spots, but generally there would be a couple smallmouth above and below to be caught off rootwads or shade. The weather turned overcast, this helped, as the fish weren't very spooky. I saw most of the strikes on the jointed swimbait. This was amazing. The aggressive chasing smallmouth bass smashed it with violence every time. Really fun to entice bites each time. A slower, often stop and go retrieve worked great. Over deeper pools, slow, painful retrieves worked best.

Got a 16"er, chunky 17"; I really had that swimbait working. Lost an absolute pig which I saw accelerate at amazing speed to overtake the swimbait and swim upstream at me. It went airborne twice. Both times impossibly big, the second time it threw the bait in the air about 15' from me. First lost pig of the year I can remember. It was a blast watching the smallmouth come up and hit that bait. 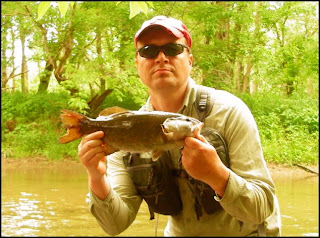 I could hardly stop wading downstream, wanting to see the next pool. Just awesome. No people. Love being on a new stream when the next bend might be 'the one' to produce something amazing. Really was nirvana.

Got off the water about 8pm fully satisfied. It had been on hell of a forced march over uneven ground at 7.3 miles. I can see this one being a mega wade with another stretch, eliminating the need to walk back. A car at each bridge or a bike in the woods would be the kicker.

Constant action when there was enough water to hold bass. Can't wait to try another. I'll be back to this one in a month or so when they've finished spawning.