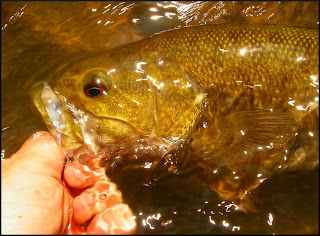 I wanted to return for another stretch of last weekend's wade only solo. The flow was high on the gauge. Wife and I drove over some streams in the area, and they did not look great. I don't like fishing new water with too much stain. Spend time in the wrong places.
I headed to another part of the state and got fishing early, maybe 8:45am. Stream has terrific canopy and rockier than hell. A real ankle buster. Water was stained from last week's high water with visibility to 18". Flow was decent. Probably a bad combination of moderately fast current, sunny skies, and stained water. At least to narrow presentations to mostly subsurface lures.
Got it going early on the 3" V-Wake R2C. 16"er, then lost a beast that seemed 17"+ on a jump. The fish was right in the deep side of a riffle hole in bedrock. Exploded is an understatement.  Bite on this bait slowed when sun became more prevalent.
I went to a 4.5" off white grub and white willow leaf 3/8 spinnerbait to get down and polish rocks based on Mr.Bass' reluctance to come up. Things got crazy! I was  slow rolling the SB in riffles, letting it bump rocks and a steady retrieve. The grub hoovered up dinks and the odd good fish, the spinnerbait picked up the nicer fish in deeper holes.
Saw several smallmouth on beds and actual act of spawning. I left these horney fish alone to do the thing. 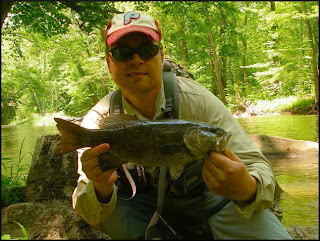