Mike and I headed back in time to the year 2000 BC on Saturday. Lots of the state being under water, we drove over some bridges for fun. Awesome thing happens when you go and look; sometimes the river is better than you'd think.


Water was chalky at the first bridge, but green. Visibility was maybe 12-14". You couldn't see down very far in the AM; the sun was not out. Mike got first bass in a decent eddy on a tube. I got two on mini chatter. We headed upstream to scout more. Nothing happened. No action. Walked back to the car, deciding to try for a different spot.

We drove around for maybe 45 minutes. Water clarity was much better at this spot downstream, improving as the day wore on. Finally arriving on a bridge and in the water by 11 am. Mike got one bass on the wake crank, then I flipped a tube near a foamy lay down and quickly pulled a nice 17.5" smallie out after it had wrapped then unwrapped on a branch. Exciting. River looked great. Habitat was excellent on our first attempt at this stretch. 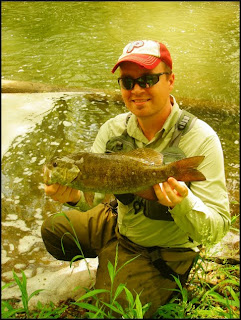 We really started getting into the olive bass, dinks, 15"'s hitting wake cranks on the dead rip. Mike lost one about 16" on a jump, then I lost one that size on a jump. In between, feasting on dinks, who greedily snared our rapidly wobbling offerings. Mike was working his WC fast across current when a big shape shot out and destroyed it, then rode the zigzag all over the creek. When it came to hand, the fish measured 18"! 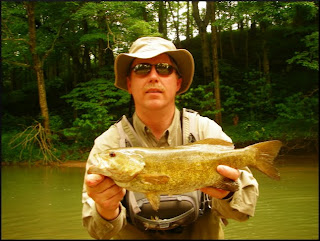 We were now officially pumped. But there is more. Much more....

We then tubed a bunch more fish on 4" tubes of many colors. I landed a hunk funky rock bass, then a longear- or some other similar sunfish that had a much bigger mouth...maybe a warmouth? The fish held my tube all the way back to me before it finally fell off the tentacles. Many times during the day, we'd turn head or be about to pull a bait from the water, when a fish would be on.

We hit a bedrock pool; the pool seemingly gave up 10-15 dinks on tube and WC's. A 15.5"er for me in some push water on the WC. Push water or the end of large pools seemed pretty good today . Another about 15" near an out bridge. More pools, more dinks. Mike commented that is seemed like they stopped biting. That was insane; his last 2 fish were 5 minutes ago! How quickly we spoil.

We got above a bridge and the action went good for better size smallies again. Two smalljaw competed all the way back to my feet for the WC. A nice 15" won the battle. Mike hit this 17" as I pulled in another 15". 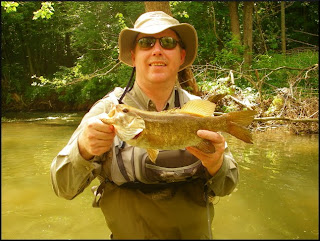 Action at the back pushwater of most every pool. I pulled Sammy 100 out and caught a fish on it, put it away. Went to a tube again for an awesome looking, deep pool. Pulled a nice 16" from deep there.

We were pretty even into the #20's the lead bouncing back and forth. I joked to Mike that I'd win by wearing him out and gain the lead by wading too far. We had only brought two water bottles each, which was pretty dumb in retrospect. Didn't expect to wade two bridges... "Unlucky thinking" says Sarah say the Chinese.

I got bored with chuck and burn WC action and was a little curious to see if the same action slightly deeper might do better in the second half of the day. 3" R2C in clown started pulling in fish. This 17" was the first nice victim: 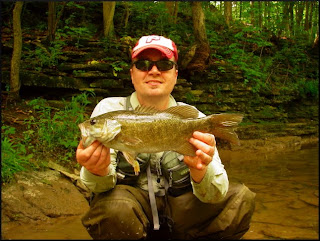 Flowers and plants growing out of moss on a rock: 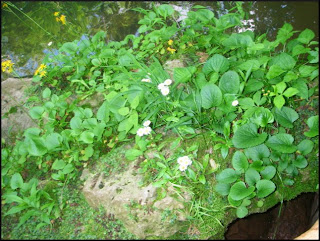 Mike nabbed a 15" on WC, and then proceeded to nail another pulling a tube through the bottom of the hole.

Not long later, my rod was bent by this 17.75" SMB that fell victim to 4" tube of random hue. Yanked deep from Davey Jones's locker. 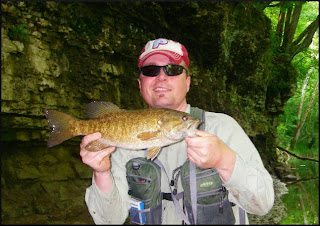 We both started to 'Rain Man' the R2C and it produced in spades. Mike got his first fish on the shallow swim bait, a 14"er, followed by a 16.5" skinny fish in nothing water next to fast, shallow current. 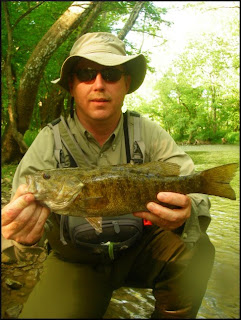 More dinks and more excellent pools. Things changed up with some log jams, creating different channels and lots of opportunity to toss a 4" tube (of variable color) in for a score. A quick 12, 13, 16"er for BT. The fish shot downstream in heavy current like they were shot out of a cannon.

As you can imagine, we were hamming it up, talk started of a 100 bass day. Mike pulled ahead on tiebreaker fish with a couple of sunnies and a chub to lead there 3-2 in case of a tie on bass. We hit dead water with good habitat and the afternoon burned a little, still catching smallmouth here or there, but the hours were short and we were miles from Mike's truck. Mike got ahead to a right angle bend with some water willow riffles, pulled one last good fish that he saw wake and slam his R2C. Another bruiser just shy of 18": 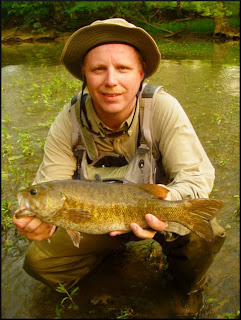 Mike caught the largest and the smallest: 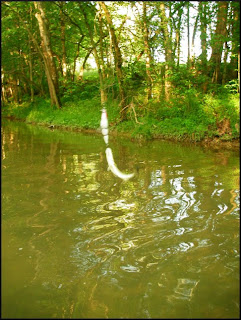 
Headed back through the woods at 8, over the hills, across the brook, then over the fence, up some hillsides across even more uneven ground until we were ready to fall over. A local, who I can only describe as looking and sounding like farmer Lye in Napoleon Dynamite gave us a ride back to the truck.


YES.
I didn't understand a word that came out of his mouth, but sure was extra grateful! Mike somehow understood the garbled speech, he grew up in eastern Indiana. Something about a "Shawshonee arrowhead from over in the creekbed"? Then "did he want to trade his truck?" for 4 wheeled Go-Kart?