I haven't been hitting many larger flows this year. I figured given half day off and a bored dog to take a look see. We arrived on stream at 1:15 PM to a clear flowing stream with 3' visibility and about perfect flow not too fast, not too slow. Everything on the table.

Wendy was awesome. She just mostly kept by my side. She's come a long way from the first few times I've taken her fishing. She used to run out ahead and swim over into holes. Now she listens very well.

It being brightly sunny, I feared the fishing would suck. Mainly set out to give the dog some good exercise.

But the Smallmouth were supercharged with an incoming thunderstorm I had failed to reckon with. Several times off the bait a bass was on and in the air before I could apply pressure. Couple fell to R2C, then a couple 12-13"ers on a tube. I had the RC LC Wake Crank working perpendicular to flow when a gigantic bass surfaced and nailed the bait. This seemed like deja vu. I had hook an enormous fish iin almost the same spot a few years back. Line had snapped and I left a 3/8 oz buzzbait in its face. Well this time, I kept the fish low and it peeled drag. I walked over to beach the fish. Now seeing it to be in the huge range 20-22". 6' from shore the crank was in the right side of its face. For a second I yelled at the dog to get out of my path. The bass jumped. The crank pulled free. The air escaped my lungs. Damn.

Threw back out, nailing a nice 15" smallie. Action was hot if not always connecting.

The storm happened. 40+MPH winds, raining buckets. We were soaked in a minute. A mile/mile and ahalf from car I decided it would eventually stop. Our family dog, normally terrified of electical storms was loving being out in this one. She tromped with glee.

We made our way to the end of  a large bedrock pool. A couple bass, crazed, jumped off hook. Next cast into the push water hooked something good on a tube. 17"+ The bass wouldn't quit. Went airborne 4 times in a 30' fight. This is wet: 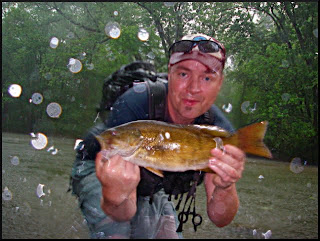 Another 4 or 5 on the R2C including another chunky 15".
Water started staining up. The waking that seemed to attract attention before the storm was ignored in this downpour. I kept to the shallow diving R2C. Picked up another 17"+ SMB once the rained slowed: 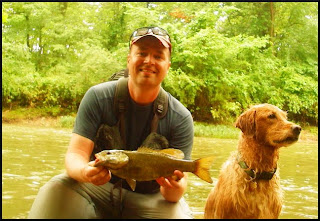 Water had come up about 4" in a very short time. The water clarity had reduced to 18" and bites were less frequent, but still willing.
This 16.5"  bass tried to swim between my legs and hide under the dog for cover. 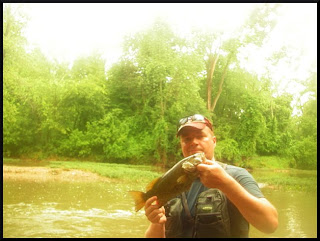