Took Wendy out for some adventure early in the AM. We were going to be out and about most of the day. Dog was to swim, run, climb, and catch until she would be pleasantly worn out.

Creek was just the right amount of water to bunch bass up. Stained with maybe 14" visibility I threw a new R2C wake crankbait. Looks a lot like the Lucky Craft version without a feather tail/jointed closer to the head. Bought it because it hase a couple of metal ball bearing knockers. First cast, I nailed this 17"er: 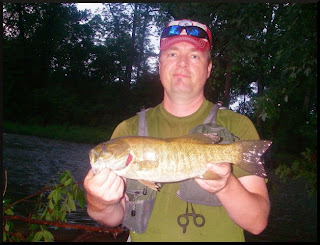