Rolled out early on Sunday, on the road by 11am. Fishing by about noon. Overnight temps were in the 50's, I thought there would be a good chance of a hot bite.

Lack of water continues to be a problem. Hit  three different holes and one very large pool. Almost no flow on the first stream, but at least leaves were on bottom for the most part.

Hit a 13"er on flashminnow 95 shallow jerk on the walk downstream. When I got to the large hole, I hooked and lost a largemouth bass on the lure. Wanting to fish the deep stuff I threw a clown colored Pointer 78. Was rewarded by a heavy fish that was soon off the hook. A few casts later, duplicated the task from off the deep barely visibile boulders on the pause. Got the fish almost in range when it too, popped off the hook. Looked in the 16"17" range. I had planned to fish float and fly so again I was throwing 8lbs mono. The hooks were too dull, but I also lose all sense of how much pressure when I switch to mono.

Picked a 14" on the jerk out of a cloud of suckers. Just letting it sit worked.

Left and hit the nearby bigger flow. Lots of walking on bedrock to my hole. Turned out to be about .75 mile further than I thought it was, when the massive hole in the bedrock opened up, it didn't dissapoint.

First a 14" on a 4.5" swimbait, then I threw on a 4" thin floating worm on a shakey head jig. I've never had luck with these. An lately, there has been no flow. But in this spot the current spilled through and over bedrock creating some current. A spot to work finesse!

I was shaking and hopping and deadsticking the worm when an unmistakable 'thunk', reared back and the fish was heavy and supercharged. Nice fight, nice fish. Saved my day of ineptitude. 18.25" 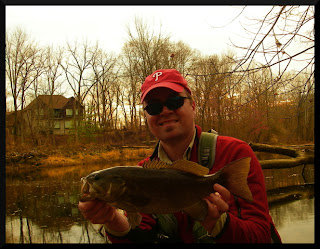