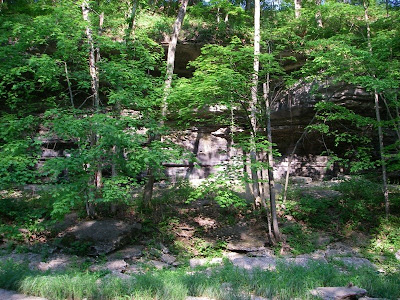 Mike and I got out for a float of two different Indiana streams. Idea being to increase the chance we might find Smallmouth that were done spawning.

We had also talked in the pregame conference about bringing ultralights for panfish in case the fishing for bronze was still off. Mike misunderstood and brought only his ultralight . During the first float I quickly put the ultralight away under the hull

We did a lot of driving today but it was worth it, it was a beautiful day.

The first stream was very shallow and had filled in quite a bit from the last time I was there, we dragged boat rather than fished a lot, but the german beer I brought helped.

We just couldn't find any decent size fish. But they were hitting the Wolkabuzz in the shallow water. I caught 10 Smallies and 2 Rock bass. Mostly dinks with the biggest being 13 and 12" 8 smallies were caught on Wolkabuzz. Mike caught about 4 Smallies on tubes or Wolka buzzes- 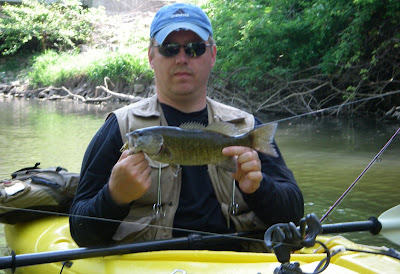 We hit a deepish pool that was covered with shade and had current running through it. I caught this skinny 18" on the bottom with 1/4ozer in about 4-5 feet water in current. 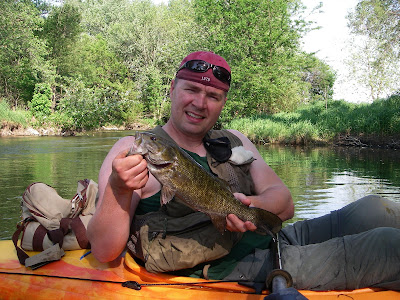 It was starting to get late so we were paddling out a bit when something behind me smacked the water hard and scared the living daylights out of me. It was a huge carp that had been in 10" of water. We saw a deer midstream and actually got within 30 yards before it jumped off.

Then last, I came through a riffle to see an owl the size of my golden retriever (or so it seemed) 10 feet away from me up on a limb. We sized each other up for it seemed like a full minute before the owl flew off. I noticed it looked to be 'shedding'. Cool!

Mike was tossing a Wolkabuzz at some chokepoints and wham! Spawned out 17" hit and fought on the ultralight. To give Mike his props, he was really without his stream smallie equipment for the most part but hung in there to the end and it paid off . 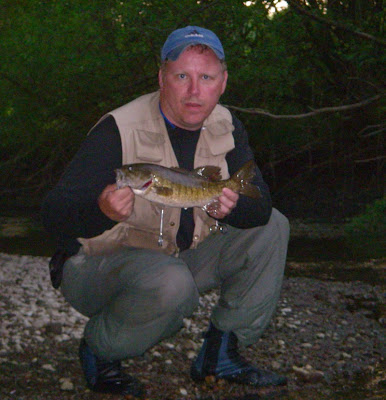 Had we been able to fish half the good spots for worry of being on the stream at dark, doubtless more fish would have been caught. As is, it was great fun.

Most of the smallies were spawned out. Strange- there were no smaller fish caught on the second float
Posted by BT at 11:43 PM