JBCook, D. Sanchez, Wool, and I hit a Medium sized Northern Indiana River about 10am after getting blitzed the night before. It looked like a long stretch, but we said we'd fish fast. Famous last words.

We put in at a dam and proceeded to drift downstream. The 'river' was chalk full of weeds. By weeds, I don't mean algae like we have here. Hydrilla and grass were everywhere. Mike and Jason started doubting Bill after Jason caught the first fish, a dink LMB on a buzzbait. I got ahead and caught a 13.5"er on Wolkabuzz off a bend with rip-rap.

We floated past 900 school kids who had alot to say. Imagine that. Passed under some LOW bridges- you had to lay flat to get under.

The fishing had been slow when I tossed a Wolkabuzz at a fishy looking spot on the bank downstream a bridge. My bail failed to close and the buzzbait plumeted down when I saw a large fish come up and pummel it. The fight was on, it fought like crazy, went airborne and eventually came to hand. 18". Lucky. 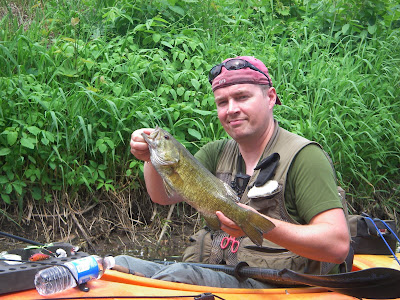 Not long after that, we came to a impassable dam dropping 20 feet to the 'river'. The fishing picked up dramatically and the habitat improved greatly. Wool and I started catching fish on Wolkabuzzes about 2 o'clock we were picking them up regularily, at one point I had three in three casts. The current busted on this part of the stream and we came across another stream that merged with ours.

I caught 24 Smallies 8 Rock bass and 2LMB, started throwing a tiny crank to catch some of the dink swipesat Wolka- started nailing googs instead. JB came back in the last half of the float with a vengeance, picking up fish on tubes he had 22 SMB, Mike had 14.

When we met up with Bill at the campground, he said we had put into a Mill race and not the river at first!

We were dead men walking by the end of this 8-10 mile float. We did fish fast- skipping some good looking water- the takeout took 9 hours with rarely a stop. That night we took it easy- and Bill probably thought we were a bit lame so livened things up a bit South Bend style! 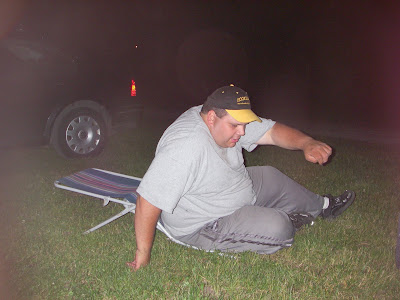