Got together with fanclub (Russelfish) this am out in the boonies. We were to meet at 615 in nowhere'sville. Russ said he'd be early so I got there about 6 after eating McYuk. I predicted in my mind Rusty would get lost. He did. Rolled up about 630. I told him I was going to give him 5 more minutes.

Well, the put in was not "right next to" the creek, nope. Not really. What happened over the next hour was like the movie Stand By Me. Except for the part about leeches on Junks. And the dead body. Well, it was pretty much just walking on RR tracks like they did in that movie and climbing down 50 foot ridges- We talked about the fat kid marrying Rebbecca Romijin:

Finally made creekfall by 745! Early on I hooked these two fish on Sammy Limonade: 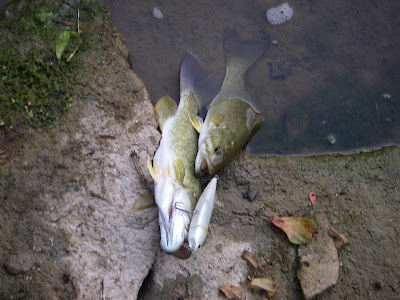 Russ, missed a couple on his dueling Sammy ahead. When I threw mine into what was about 8" of water a big fish destroyed it and pulled me downstream towards the next riffle. Finally got it landed. It went 19.5" ! 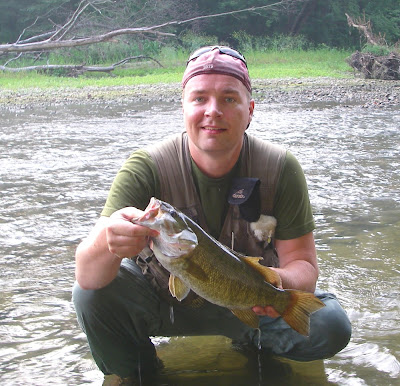 Unfortunately, the 3.6 mile 8 hour stretch I picked had lots of big long pools rather than more smaller deep pools, this kept our numbers down a bit as we did a lot of wading between riffles and push water- most fish were caught in current at the front or back as the day went on and the sun came out they had moved to shade.

I did pick a roomy stretch, so we weren't rubbing elbows and we mostly threw Sammies. I threw a tube/WBZ a bit and Russ caught some fish with his Flukes.

We had just talked about called shots when Rusty commented about a fish being behind a boulder. He wisely chose to make a long cast past it and the fish nailed his bait. It was a pretty 15-16"er so we took a picture of the fish. Here it is for your enjoyment (sans good photography):

We got to a bridge where I hit a dink which was follwed by and 18 that went right up to our feet before it saw Russ. I then hooked and lost the same fish moments later under deep logjams.

Russ was really starting to get the hang of new rod and reel. He was zinging his casts increasingly close to danger=good. He was hampered throughout the day by his spool being less than half full- resulting in lots of friction on the line.

We landed fish here and there 12-15"ers on a assorted baits when we hit a pool that had a stream coming out of the mountains- that bank was deep grassed and directly in the sun. I took the sunny side and sent Russ up to hit the shade and front of riffle. Caught two fish and was working Sammy extra slow along the steep bank by grass when a fish annihilated the bait right near shore. After a short viscious fight I beached the whale! 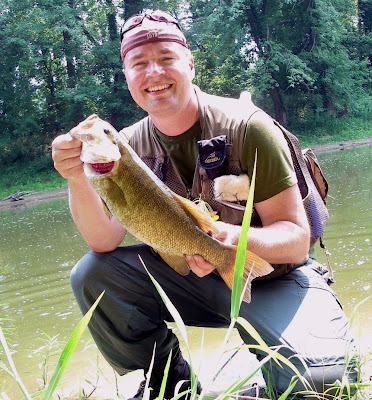 We picked fish here and there and were both wilting in the heat. I asked Russ if he wanted to walk back to the car via road or hit the last good spot. Fatefully, he decided to go on. 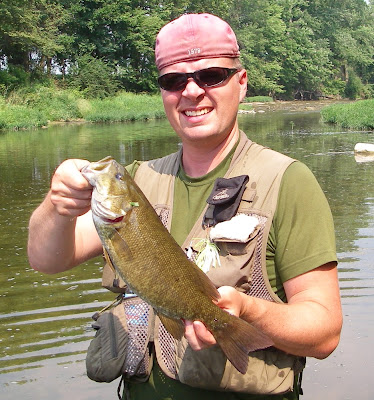 Rusty is a lot of fun to fish with and a hell of a funny guy. Look he and Macfan26 up if you are near Lafayette! I'll definately fish with both again .
Posted by BT at 2:24 AM