Waded the part of the same stretch jjwilson caught his 20"er on Sunday. Only guessed after I saw footsteps all over the place .

Got fishing by 615am, Started catching active fish at the top of pools immediately on a limonade Sammy. A 15", 14", 13". Then a 16.5" on a tube and another 13" Moved up to a spot Riff should remember me calling my shot for a 18" last time there, well sure as spit another big one hit, but this time he made it into the logs and was gone, when I went to free my sammy a 15" smallie that had been under the log jumped up onto my back .

At the next pool, I quickly hooked a fish 17" or so and lost it as it dug into a stone in shallow water and the sammy pulled free. Then I had the same thing happen again moments later on another 17" or so fish. Caught a 15 and a dink then moved up and hooked a 19"+ and quickly lost it on the jump! WTF? Looked at my hooks and a couple tips were turned a bit. Swapped for some equal size crank hooks and moved up tossing a tube where appropriate, etc..

Next big blow up produced a 17"er to hand: 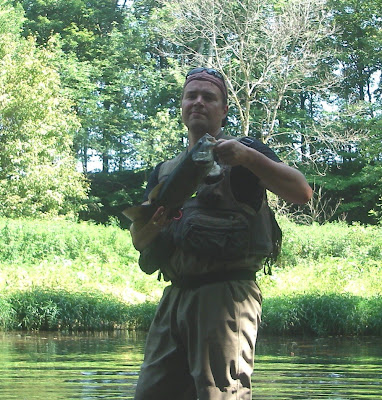 Fish were in the shallowest of current areas, several times I surprised a group of them in inches of water.

At one point 5 hours in, I had 26 smallies but only one 17" and had lost like 6 or more 17"+, so I had to go on hoping for one good bite I knew would come. Threw a tube in a bathtube sized hole after a couple dinks missed a sammy was surprised to pull a 18" out! Doesn't look 18" maybe I mixed up the picks. Sorry I'm fried. 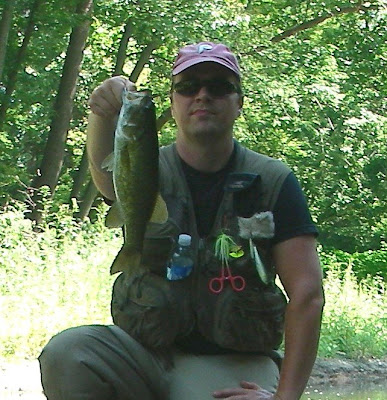 Then I lost another 17"+ when I tried to pull it just a little too much. Landed several 15-15.5"ers on the sammy, one on a popper then like 4 in a row from behind a stump/shade on sammytime.

Went up the next stretch and caught a 17" on a tube where Wool had seen me hit one on a skipped sammy under a tree. The fish came back and I got him. Caught another 15.5 under a log on a tube. 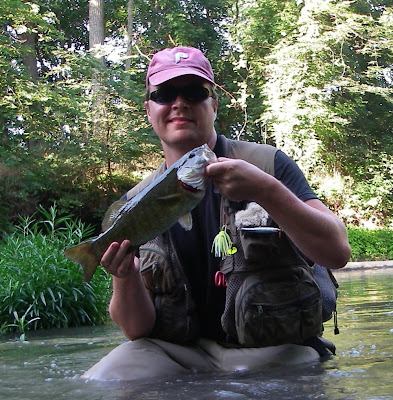 Moving up I decide to throw a LC Flashminnow 95. I finally got to futz with it a bit on a long slow stretch and the lure performed! Jerk, jerk stop= 15.5 LMB, then a 14" and a couple 12"ers. Nothing out of the hawg spot then moved up and caught this 17" on a Sammy:


Then I caught a couple of dinks lost another good one pulling the lure free, then hooked an 18" fattie on sammy out from a Sycamore tree- dropped him and didn't take a picture. Moving up I caught a 18"LMB that followed the Sammy in less than a foot of water in slow motion- then engulfed it. 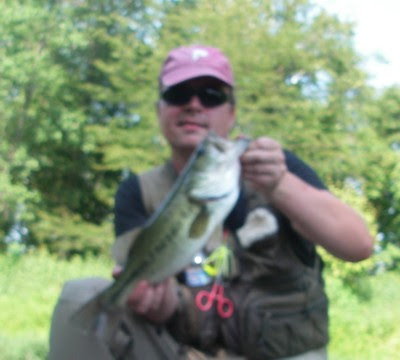 Other funny things: had a blue heron nearly divebomb the Sammy until I yelled at it. Saw one of those stupid little green herons skulking around.

Here's a pick of another fish I caught at some point. 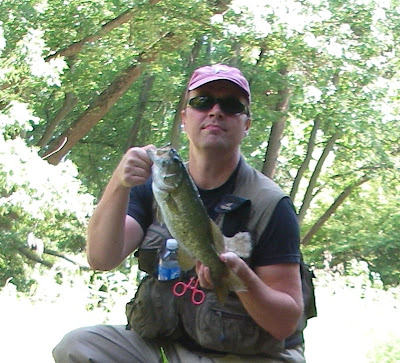 Got to get some new trebles and loosen the drag a bit!